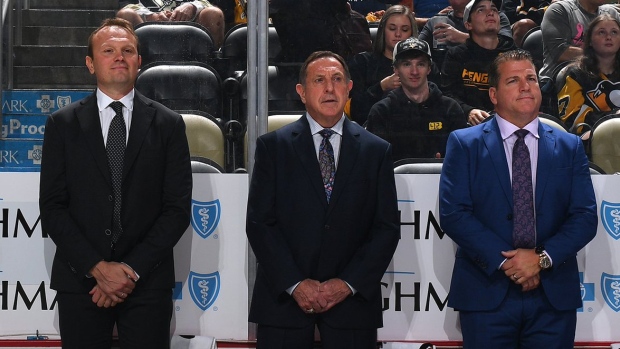 Mark Recchi played and lifted the Stanley Cup with Mario Lemieux, Jaromir Jagr, Patrice Bergeron and Zdeno Chara and coached Sidney Crosby and Evgeni Malkin, so the Hockey Hall of Famer knows a thing or two about winning with stars.

It might take some time for him to help the New Jersey Devils get to that point, but he's willing to take on the challenge. Recchi on Wednesday joined new coach Lindy Ruff's staff as an assistant, and he's excited at the young talent they're inheriting and hoping to turn New Jersey back into a playoff contender.

Recchi will be tasked with improving the Devils’ power play, which ranked 21st in the NHL last season, and helping the progression of No. 1 picks Nico Hischier and Jack Hughes and others with limited pro experience. After three seasons as an assistant with the Pittsburgh Penguins, he feels he has the right approach to get through to young players.

“Communicating now is more important than ever: These kids want to understand, they want to talk to you about it, they want to understand how to get through it,” Recchi said on a conference call. “I think that's the important thing that I'm going to be able to bring and I hope I can. I really want to help these young players and the New Jersey Devils, all the players, to build something special here.”

Recchi won the Cup three times during his 22-year playing career as a scoring winger and twice more as Penguins development coach. He and Pittsburgh's other assistants didn't have their contracts renewed after a first-round playoff exit, and the Penguins began filling those spots by hiring Washington Capitals coach Todd Reirden following his firing.

It wasn't immediately clear if or how Recchi's hire affects Alain Nasreddine, who was elevated from his assistant role to interim coach with the Devils last season. General manager Tom Fitzgerald, who had his interim tag removed after replacing Ray Shero, said earlier this summer Nasreddine was still under contract and it would be up to Ruff to decide his role on staff.

Nasreddine, who played with Recchi in Pittsburgh, was a defenceman and could return to coaching the Devils' defence. Recchi, who overlapped with Fitzgerald for one season with the Penguins, brings something different.

“His work with the power play and managing personnel in Pittsburgh are skills that will benefit our group moving forward,” Fitzgerald said in a statement. "Mark’s leadership, communication abilities, patience and presence will be integral for the growth of our young core.”