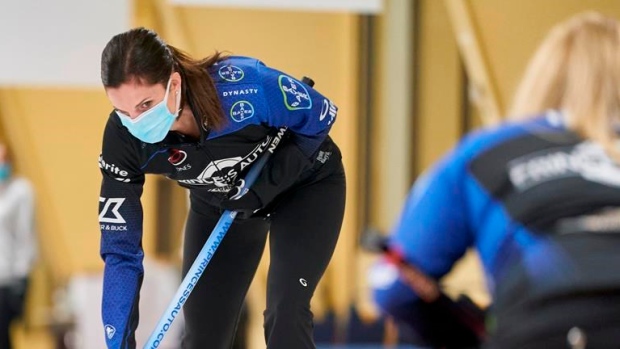 WATERLOO, Ont. — Skip Jennifer Jones adjusted her blue facemask, settled into the hack, and with new teammate Lisa Weagle to her right, released a stone in a competitive women's team game for the first time since last winter.

"It's great to be back on the ice, this is our happy place," Jones said Friday. "This is what we love to do."

The Roaring Game is back in a limited fashion with new rules in place due to the COVID-19 pandemic.

The sport is slowly resuming play around the world in a season that remains one big question mark. Several top events have been postponed or cancelled with 2021 competitions tentative at best.

Team Jones was one of the showcase teams on Friday at the Stu Sells Oakville Tankard, a bonspiel that would normally draw a top-flight international field.

This year's competition, moved to nearby Waterloo since the regular host club has yet to reopen, is limited to a domestic field with most players from Ontario.

When Jones, Weagle, second Jocelyn Peterman and third Kaitlyn Lawes arrived at ice level for the morning draw at the KW Granite Club, they first had to find room for their gear.

Benches and chairs by the sheets were blocked with yellow caution tape. Distancing and venue capacity rules were in effect under return-to-play guidelines.

The usual curling routine was noticeably different. Locker-room access was limited so players arrived in their uniforms. Warmups were done in the parking lot or viewing lounge.

Teams took to the ice in stages. Mask use was mandatory, although players could lower the covering at certain times if desired.

To help with distancing, two players followed the rock down the ice but only one could sweep.

The skip in control of the house was stationed in the rings area but was not supposed to put the broom down. The other skip waited by the boards.

"It's hard to not sweep behind the T-line," Jones said. "It's such a habit. You want to get in there. But at the end of the day, we're going to do everything we can to try to make it safe for everybody and have the season last as long as we can."

Frisbee-sized logos on the ice served as designated waiting areas for players when the opposing team threw stones.

"You're kind of used to standing near the hog line," Weagle said. "Now we've got to stand in the middle of the sheet. So just a few extra things to think about."

Weagle, considered one of the best leads in the game, was dropped by Team Rachel Homan last March. She was quickly snapped up by Team Jones, which became a five-player team (with lead Dawn McEwen, who took this week off).

Both players have impressive resumes.

Jones, 46, became an Olympic champion in 2014 and has won six national titles and two world titles.

Weagle, 35, a three-time national champ, won a world title in 2017 and represented Canada at the 2018 Winter Games.

The new lineup is off to a great start. Team Jones opened play with a 14-0 shellacking of Team Bella Croisier in a game called after four ends.

"We've spent so much time over the summer on Zoom calls and phone calls and doing the planning," Weagle said. "And now it's time to execute.

"We really wanted to have fun out there and that's what we're doing."

This report by The Canadian Press was first published Oct. 2, 2020.