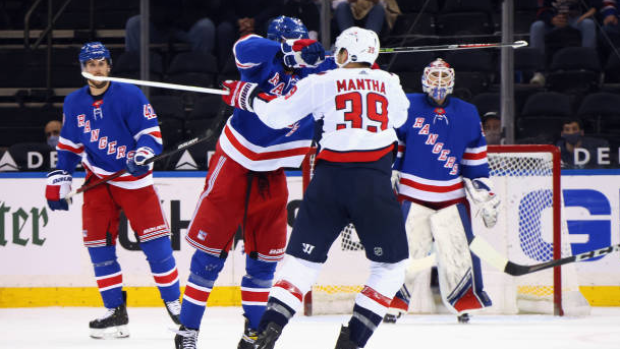 Buchnevich was assessed a five-minute major and a game misconduct in the second period of the game after cross-checking Mantha in the face. The incident came as Matha had a delayed penalty coming to him for unsportsmanlike conduct after slashing Buchnevich multiple times as he followed the Rangers forward around the offensive zone. The cross-check came as Mantha turned back to engage Buchnevich while the Rangers exited their zone.

Mantha was not injured on the play and went on to log 21:32 of ice time in his team's win. He has 15 goals and 27 points in 53 games with the Capitals and Detroit Red Wings this season.

Buchnevich, 26, saw his penalty minutes total for the season increase to 42 on Wednesday night. He has 20 goals and 45 points in 53 games.

Wednesday's game had a total of six fights as the Rangers sought revenge for Tom Wilson's actions from Monday night. Wilson was fined $5,000 on Tuesday for punching Buchnevich in the upper-back while he was on the ice, but went unpunished for injuring Rangers star Artemi Panarin in the scrum that followed.

"When your star player gets tossed around like that, I mean, it doesn't matter what type of team you have, I think the response was appropriate," Rangers centre Ryan Strome said. "Proud of our guys. I think it says a lot about us."

“I think it was good. We were just trying to stick up for our teammate,'' added defenceman Brendan Smith, who fought Wilson on his first shift of the game. "It was a good response for sure.”

Capitals head Peter Laviolette, meanwhile, was happy to see him to pick up two points to close on the Pittsburgh Penguins for the division lead.

“I thought our guys really hung together and stuck together, did what we needed to do and got to the two points and heading home,'' Laviolette said. ”I think the way we just stuck up for each other and played for each other the entire night, I thought we did a good job just staying disciplined as well. It was the game that was kind of dealt to us and I thought our guys did a terrific job with it."