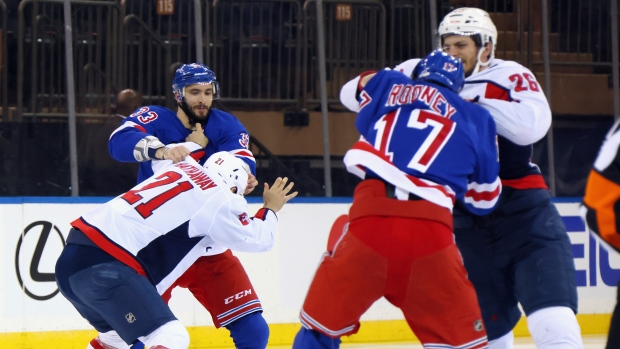 Oshie beat Alexandar Georgiev 12 seconds into the middle period with a shot from the right circle with Rangers forward Pavel Buchnevich in the penalty box.

Oshie scored again at 8:26 of the second — again with Buchnevich penalized for a high-sticking major — his 20th goal of the season.

Oshie, whose father died this week, completed his hat trick with an empty net goal at 18:20 of the third.

“We are trying to be there for him and take care of him and he ends up taking care of us,” Dowd said of Oshie who was surrounded in a giant group hug from teammates at the Capitals bench.

Nic Dowd also scored for Washington at 14:48 of the second with assists to defenceman John Carlson and Dmitri Orlov, his second of the game.

Rangers rookie Alexis Lafreniere ruined Vanecek’s shuout bid at 1:15 of the third period with his 11th goal of the season. Fellow rookie forward Morgan Barron scored his first NHL goal at 18:44 to complete the scoring.

Vanecek, the 25-year-old rookie from the Czech Republic, improved to 20-9-4 this season. Vanecek was elevated into a key role for the Capitals when former Rangers goaltender Henrik Lundqvist signed with Washington but couldn’t play because of a heart condition requiring surgery.

The Capitals moved into a first-place tie with idle Pittsburgh in the East Division. Washington has three games left while the Penguins have two.

“I thought our guys really hung together and stuck together, did what we needed to do and got to the two points and heading home,'' Capitals coach Peter Laviolette said. ”I think the way we just stuck up for each other and played for each other the entire night, I thought we did a good job just staying disciplined as well. It was the game that was kind of dealt to us and I thought our guys did a terrific job with it."

The dismal loss — the Rangers’ fourth straight — came in their home finale and on the same day the organization stunningly fired President John Davidson and General Manager Jeff Gorton. The team said former Ranger Chris Drury would take over both jobs.

“It’s obviously a crazy day. You add in the anxiety or anticipation all day from our group, and then waking up from a pregame nap with the whole set of news,'' Rangers forward Ryan Strome said. "It’s never easy, I think, in pro sports. It’s a tough business.”

The contest also followed Monday’s 6-3 loss to the Capitals in which Washington forward Tom Wilson pummeled Rangers top scorer Artemi Panarin after Wilson had punched Buchnevich during a scrum near the Capitals net. The loss eliminated the Rangers from the playoffs for the fourth straight season.

Wilson was assessed 14 minutes in penalties but not tossed from the game. On Tuesday, the NHL fined the Capitals agitator $5,000 leading the Rangers to issue a scathing statement criticizing the league and its director of player safety, George Parros.

Rangers defenceman Brendan Smith then took on Wilson at the 50-second mark. Smith received an extra two-penalty for instigating the fight with Wilson, who was booed loudly every time he skated on the ice.

“I think it was good. We were just trying to stick up for our teammate,'' Smith said. "It was a good response for sure.”

Wilson left the game after the first period. with an upper-body injury after skating four shifts for a total of two minutes and 36 seconds.

The penalty boxes were overflowing for both teams. At one point, there were six Capitals crammed into the visiting box.

In addition to their leading scorer Panarin - who was hurt in Monday’s skirmish with Wilson – the Rangers were also without injured defencemen Jacob Trouba and Ryan Lindgren and forwards Chris Krieder and Brett Howden.

“When you play for each other and do things for other people, there’s no better felling about creating unity and feeling like a team," Rangers coach David Quinn said. "I think we took a step forward as a team."

The Capitals were without captain Alex Ovechkin again Wednesday night. Ovechkin skated only 39 seconds Monday night before leaving the game. He also missed the previous four games with a lower-body injury. Ovechkin needs one goal to tie Marcel Dionne at 731 for fifth place all-time.

Capitals: Host Philadelphia on Friday and Saturday before finishing regular season next Tuesday with rescheduled game against Boston.