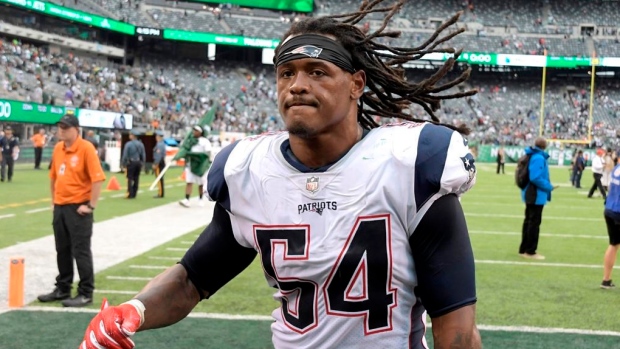 With training camps set to open, and an Aug. 3 opt-out deadline fast approaching, New England Patriots linebacker Dont'a Hightower headlines a group of players to exercise opt-outs for the 2020 season. Keep up to date with all the latest opt-outs on TSN.ca.

New England Patriots linebacker Dont'a Hightower joined the list of players to opt-out for the 2020 season, Tuesday morning according to a report by ESPN's Adam Schefter.

Hightower is scheduled to make $8 million in base salary during the 2020 season.

The 30-year-old had a baby on July 16. "Me and my fiancée are just more concerned with the health of our family than football — especially the new addition to our family.”

He is one of five Patriots players to opt-out.

Green Bay Packers wide receiver Devin Funchess confirmed in an Instagram post on Tuesday afternoon that he, too, will be opting out of the 2020 NFL season.

Noting that his "closest family members have experienced the life-threatening impact of COVID-19 first-hand," the 26-year-old Funchess says he is doing "what is best for [him] and [his] family at this time."

Signed in the offseason to a one-year deal, Funchess spent 2019 with the Indianapolis Colts, but only appeared in a single game after a broken collarbone.

The Michigan product spent the first four seasons of his NFL career with the Carolina Panthers.

Philadelphia Eagles wide receiver Marquise Goodwin is planning to opt out of the 2020 season over coronavirus concerns, according to NFL Network's Ian Rapoport.

Goodwin, 29, was acquired by the Eagles during the draft but won't be suiting up for the team this year.

The wide-out has a five-month daughter after his wife previously had three miscarriages.

In 2019, Goodwin opened up about his family experience in a YouTube video with his wife, Morgan.

Baltimore Ravens offensive tackle Andre Smith, has decided to opt-out, according to Rapoport.

Smith, 33, re-signed in Baltimore and was expected to contend for a backup job, he is the second Raven in as many days to opt-out of a season, joining wide receiver and kick returner De’Anthony Thomas.

At this point last year, Peko had left the Buffalo Bills’ training camp to be with his wife Giuliana who was battling Hodgkin’s Lymphoma. The couple later said she was cancer-free.

The Houston Texans will be without DT Eddie Vanderdoes for the 2020 season as he plans to opt out due to the coronavirus pandemic, according to Rapoport.

Vanderdoes signed in Houston late last season and was expected to be part of the defensive line rotation this season.

In three games with Houston, the 25-year-old had five solo tackles and three assists on tackles.

Dallas Cowboys wide receiver Stephen Guidry has elected to opt-out of the 2020, according to Rapoport.

Guidry was an undrafted free agent out of Mississippi State who signed with the Cowboys.

He caught 49 passes for 827 yards and eight touchdowns at Mississippi State last season.

Buffalo Bills defensive tackle Star Lotulelei will be taking a voluntary opt-out for this season, according to NFL Network's Mike Garafolo.

In 16 games last season, the 30-year-old had 19 combined tackles, two sacks and one interception.