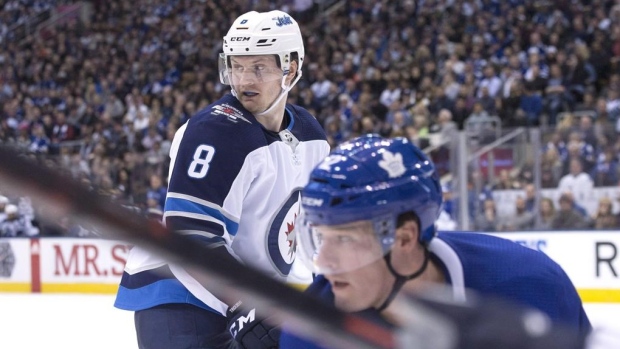 Jacob Trouba is set to become a restricted free agent for the last time this summer and Ken Wiebe of The Winnipeg Sun writes that with little signs pointing to a long-term future with the Jets, he believes the defenceman could be dealt ahead of the draft.

Trouba, 25, requested a trade from the Jets during a contract dispute in 2016 and Wiebe believes there's little evidence to suggest he would sign a multi-year extension with the team.

The Jets are without a first-round draft pick next month and Wiebe writes the team "would love" to get a first-rounder and a top-pairing defenceman back in a trade. He admits, however, that the Jets would unlikely fetch that for Trouba alone and wonders if the team will instead try to package Trouba as part of a bigger deal. He notes the Jets could accept a lesser return by including a contract to help shed salary in their cap crunch, or include another valuable asset in hopes of completing a blockbuster trade.

On a long-term deal, Wiebe speculates Trouba could carry a $7.5 million-$8.5 million cap hit, which he notes will rule out some contenders from pursuing the defenceman.

Trouba was awarded a one-year, $5.5 million contract in arbitration last summer and can become unrestricted free agent in 2020. He scored eight goals and posted 50 points in 82 games this season while averaging 22:52 of ice time, second most on the team.

He is listed at No. 2 on the TSN Trade Bait board.

After his team's strong showing in the playoffs, Colorado Avalanche general manager Joe Sakic said he planned to aggressive in free agency this summer to help improve his roster.

According to Adrian Dater, two forwards are high on Sakic's list of potential additions on July 1.

And yes, I expect the Avs to make a BIG pitch to the Bread Man. That has never changed https://t.co/cl6a0KU2gl

The Arizona Coyotes could be a team to watch in the European free agent market with general manager John Chayka and assistant general manager Steve Sullivan currently scouting the World Hockey Championship in Slovakia.

According to Craig Morgan of The Athletic, the Coyotes were pursuing Swedish forward Anton Wedin before he elected to sign with the Chicago Blackhawks. Chayka added, however, that there are still other targets on his list.

“There’s a couple players that we’re talking to, not of the higher-end variety, but some guys that we think could add some good depth,” Chayka said. “Some of these guys have options, so do they stay or come over? We’re having some good discussions.”

The Coyotes have $74.38 million committed towards the salary cap for next season, according to CapFriendly.