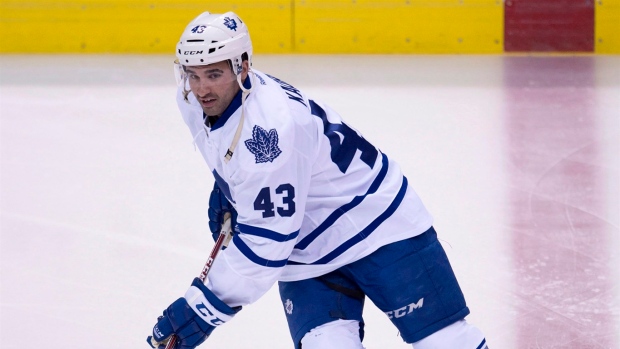 Nazem Kadri’s season could be cut short by a game.

The NHL’s hockey operations department is reviewing a throat-slashing gesture the Maple Leafs centre made toward Flames defenceman Mark Giordano during Tuesday night’s game in Calgary.

Kadri ultimately may not be disciplined for the hand signal, but the NHL has previously suspended players for the same.

In 2010, Blackhawks defenceman Nick Boynton was banned from Chicago’s season-opener after he made a throat-slashing gesture following a preseason fight. Boynton was also suspended in 2006 for the identical motion.

The NHL first deemed throat-slashing gesture’s a no-no with a warning to Florida’s Peter Worrell in 2000. It has frequently been outlawed when caught on camera since then.

Kadri, 25, was disciplined for the same hand motion during a 2010 World Junior Championship game for Team Canada against Switzerland.

On Tuesday, Giordano laid out Kadri with a hit on the shift prior to the gesture.

Both players responded to the incident after the game.