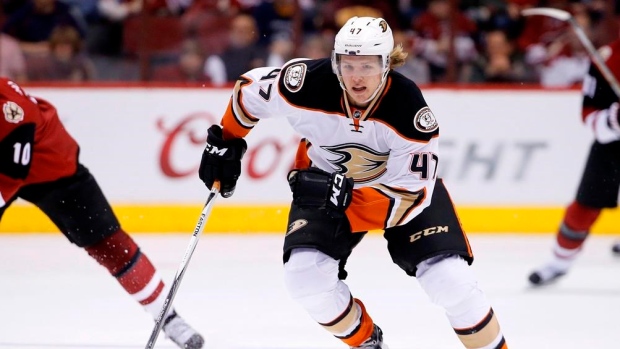 New Anaheim Ducks general manager Pat Verbeek is laying his cards on the table ahead of the trade deadline.

Verbeek told TSN Hockey Insider Pierre LeBrun in The Athletic that he intends to move the team's pending unrestricted free agents if they have not been signed an extension before March 21. That list of players includes defencemen Hampus Lindholm and Josh Manson, as well as forward Rickard Rakell, who's on pace to top 20 goals this season.

“I think going into this, I’m looking at it like we could make the playoffs, we could miss the playoffs,’’ Verbeek told LeBrun. “At the end of the day, there’s no guarantee I can get those three free agents back. I’m going to attempt to sign them, if it doesn’t happen, I just can’t let them walk out the door free.’’

LeBrun reported last week that the Ducks have opened extension talks with Lindholm, but the 28-year-old is atop the wish list of many contenders ahead of the deadline. Signed at a cap hit of $5.2 million, Lindholm has five goals and 20 points in 53 games this season.

Manson, who carries a $4.1 million cap hit, has three goals and seven points in 43 games this season.

The Ducks, who suffered a 4-0 defeat to the New York Islanders on Sunday, currently sit two points back of the Dallas Stars for the final wild-card spot in the Western Conference with three more games played.

Verbeek, though, said that his aspirations for the Ducks go well beyond this season.

“My goal is to improve the team as best I can and as fast as I can,’’ Verbeek said. “So I’m not saying ‘No’ to anything, I’m open to anything.’’

The Boston Bruins have occupied a wild-card spot in the Eastern Conference for most of the season, but Kevin Paul Dupont of the Boston Globe believes the team needs to sure up their defence to make a run in the postseason.

Dupoint writes that the Bruins have yet to find a steady partner for No. 1 defenceman Charlie McAvoy and points to Arizona Coyotes blueliner Jakob Chychrun and Dallas Stars pending free agent John Klingberg as two players the Bruins could target ahead of the deadline.

Chychrun, who currently sits No. 1 on the TSN Trade Bait board, is signed through the 2024-25 season at a cap hit of $4.6 million and Dupont notes the 23-year-old won't come cheap. He believes the Bruins could start by offering disgruntled winger Jake DeBrusk, but it will also take parting with a top prospect such as blueliner Mason Lohrei or a veteran like defenceman Brandon Carlo off their roster to secure a deal.

Klingberg would not as natural of a fit beside McAvoy since they're both right shots, but Dupont writes he should come cheaper as a rental and the Bruins would have the freedom to walk away in July should the move not work out. In 45 games with the Stars this season, the 29-year-old Klingberg has one goal and 25 assists. He is currently listed at No. 5 on the Trade Bait list.

The Vancouver Canucks posted their third straight win Sunday, moving to within three points of the final wild-card spot with a 5-2 victory over the New York Rangers.

However, with the race for the wild-card spots crowded in the Western Conference, rumours have continued to swirl around the future of Canucks' leading scorer J.T. Miller.

Miller extended his point streak to six games in Sunday's win, and TSN Hockey Analyst Mike Johnson believes the danger in trading the 28-year-old would be that it would send a message to the whole team that the Canucks are giving up on the season.

Seattle Kraken general manager Ron Francis confirmed over the weekend that he will explore deals to move captain Mark Giordano to a contender ahead of the trade deadline.

TSN Hockey Insider Pierre LeBrun reported last week that the two sides had spoken and agreed looking for a trade was their best option.

“Obviously with Gio, it’s the opportunity to win — he hasn’t won (a Stanley Cup) yet — and that’s something that’s intriguing to him,” Francis told the Seattle Times. “So, we’ve agreed to explore possibilities and see if there’s something there that gives him that possibility.”

Earlier this month, LeBrun pointed to the Florida Panthers as one of the team's interested in the 38-year-old, while Geoff Baker of the Times wonders if the Toronto Maple Leafs, New York Rangers and Calgary Flames could also get in on the bidding.

Giordano, who carries a cap hit of $6.75 million, has six goals and 23 points in 49 games with the Kraken this season.

While the Kraken's inaugural season has not gone to plan, Francis added that he believes the team is not as far from contending as some might think.

“I don’t think the season’s gone the way we had hoped,” Francis said. “But I think when you look at the big picture, we’ve had 12 one-goal game losses. We’ve had eight other games that were one-goal games that became more than that because of empty net goals.