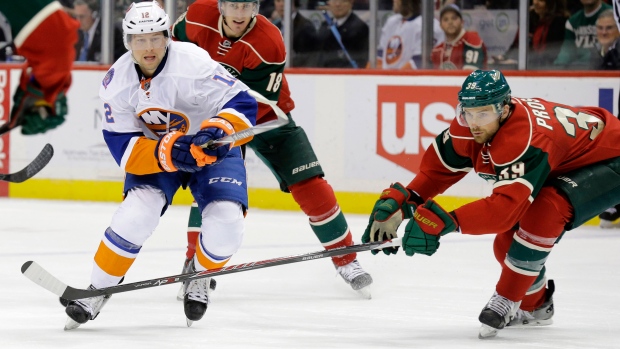 ST. PAUL, Minn. - Booed off the ice after a listless first period against the New York Islanders, the Minnesota Wild found their fire.

Their play immediately picked up out of the intermission. Then the inspiration came in frightening form, when defenceman Keith Ballard's head hit hard on the ice.

Nino Niederreiter dived for a loose puck in traffic around the net and tapped in the go-ahead goal with the end of his stick with 4:33 left, capping a furious comeback by the Wild for a 5-4 win over the Islanders on Tuesday night.

"We have too much pride and character to allow that to continue, and I thought we showed that the rest of the game," coach Mike Yeo said.

Ballard was driven into the glass between the benches by Islanders left wing Matt Martin, who wasn't penalized for his straight-on hit. Pinned awkwardly against the wall, Ballard fell before his helmet bounced against the ice.

"It was a very emotional night," captain Mikko Koivu said. "At the end a great feeling, but still you don't want to see one of your teammates going down like that."

Ballard got up after a few minutes and walked slowly with assistance to the locker room, before being taken to a hospital for further observation and evaluation.

"It obviously was a scary moment at the time, but I felt like we carried it in a positive way," Niederreiter said.

Mikael Granlund immediately hit Kyle Okposo, who drew a slashing penalty for angrily hitting Granlund in the leg in response. Jason Pominville scored on the power play on the first of three assists by Ryan Suter, who returned from a two-game absence to the mumps. Then Kyle Brodziak dropped the gloves with Martin upon his re-entry.

"With what happened to Keith, it was all pretty sickening to us," said Thomas Vanek, who scored the tying goal with 8:12 left.

Vanek, who played part of last season with the Islanders, said he didn't believe Martin intended any malice.

"I heard it wasn't dirty, but still we're all playing this game because we love it and we shouldn't hurt each other," Vanek said.

The Islanders lost their second straight game after taking a 3-0 lead in the first period.

"They kept coming and we didn't. We're more upset with the way we played, not the way them came at us," said Josh Bailey, who made it 4-1 on the Islanders' only shot of the second period. "We should be able to handle that."

Sloppy faceoffs and weak defence in front of the net helped smooth the Wild's path to victory.

"You've got to have the will to defend around your goalie," Islanders coach Jack Capuano said.

Koivu scored early in the third period for the Wild to spark the comeback, and Erik Haula's goal brought them within one.

Chad Johnson got the surprise start over Jaroslav Halak, who had an 11-game winning streak stopped on Saturday when he gave up six goals to St. Louis after being given the big lead.

Johnson, who made 25 saves, skated toward the bench and whacked his stick against the wall after a whistle soon after Niederreiter's goal.

"We've got to win some one-on-one battles and generate some forechecks and some momentum to get some pressure off our 'D'," Islanders captain John Tavares said.

Michael Grabner, Brock Nelson and Martin scored early for the Islanders against Niklas Backstrom, who finished with 15 saves. The Wild outshot the Islanders 27-8 over the final two periods.

"We shouldn't have to have something like that to bring it out of us," Yeo said.

NOTES: The last NHL team to score on its lone shot of a period, according to STATS research, was Buffalo in the second period last season, April 10, 2014. ... The Wild have outshot opponents in 23 of 26 games this season. ... The Islanders kept their injured list at five, taking defenceman Lubomir Visnovsky (upper body) off before the game and placing centre Casey Cizikas (upper body) on it. Cizikas was hurt on Saturday. ... Nelson leads the Islanders with 13 goals. ... Most NHL teams typically have at least one native Minnesotan playing in front of family and friends against the Wild, but the Islanders generated more extra ticket sales than usual with Okposo (St. Paul), Nelson (Warroad), Leddy (Eden Prairie) and Anders Lee (Edina). Okposo and Leddy, who was the Wild's first-round draft pick in 2009, also played briefly for the University of Minnesota before turning pro.