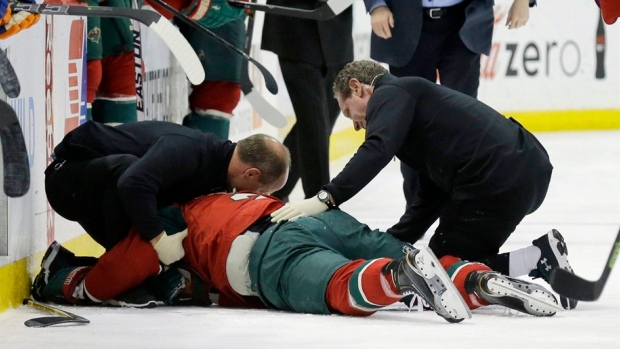 The Wild announced Ballard was conscious while he was taken to Regions Hospital for evaluation and observation.

Coach Mike Yeo said after the Wild's 5-4 victory that he had no further update on Ballard's condition.

Ballard passed the puck at mid-ice midway through the second period and tried to turn away as Martin charged toward him at a straight-ahead angle. Martin's forearm was raised for contact, and Ballard was slammed into the glass partition separating the benches above the wall.

Pinned awkwardly, Ballard fell, and his head bounced hard on the ice. At one point, he appeared to be convulsing back and forth as medics hustled out a stretcher, just a few feet in front of concerned players and coaches on the Wild bench.

But Ballard was able to get up after a few minutes and walk slowly to the locker room with assistance. Defenceman Nate Prosser said he believed Ballard's face hit the dasher board because he saw blood on it. Ballard had cuts on his face.

"All I can do is really pray for him right now, and hopefully he's feeling all right," Prosser said.

Prosser was yelling at the Islanders bench after the hit. Speaking to reporters in the locker room after the game, Prosser had to stop to compose himself a couple of times.

"That's something we never want to see in this sport," Prosser said.

Wild forward Thomas Vanek, who spent part of last season with the Islanders, said he doesn't believe Martin intended any malice. He did, however, call the move "a dumb decision" by Martin.

"I was actually on the forecheck, and the next thing I know he was in a lot of pain, obviously. It's something I don't wish upon anyone," Vanek said, adding: "It was sickening, but we took the emotions the right way and deserved to win."

Martin was unavailable for comment. Islanders coach Jack Capuano came to his defence.

"It's tough for Matty. Obviously, he's not that type of player. I didn't see it on the video from the bench. It looked like he may have turned at the last minute," Capuano said, adding: "Just hoping that he's OK."

The Wild had a Wednesday morning flight scheduled for San Jose, where they will play on Thursday night.

"Hopefully Keith is well, and we'll move on and have him back as soon as possible," captain Mikko Koivu said.