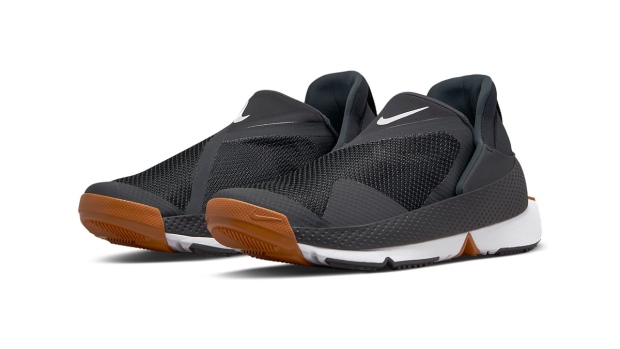 Equipped with the same technology for convenient hands-free wear, Nike is debuting their popular GO FlyEase in a new black and gum colourway.

Nike last released two variations of the slip-on design in vibrant colour schemes such as the “Red/Black” and the original light green and blue edition dropped earlier this year.

This latest installment continues to bring the same accessible functionalities with the tension band, bi-stable hinge and kickstand heel with a clean black mesh, foam and leather.

Nike’s GO FlyEase is one of the brand’s latest innovations that has been met with popularity, including being praised as one of the best consumer innovations of this year by Time Magazine, for its simplicity and accessible design which is convenient for those who would like and need the independence of putting on their shoes without the use of hands.

The ability to tie our shoes may be something most people take for granted—but for many of us, lacing up can be a real pain. Nike aims to fix that problem with the GO FlyEase, a shoe that wearers with disabilities can slip on and off, hands-free https://t.co/xZgAQTanPU

Nike has started creating new editions of the shoe in an effort to tackle the issue of them being sold out quickly once initially released, in which they are put up for a much more expensive retail price of over $400 USD.

The Nike GO FlyEase black and gum colourway will retail for US$120.  A release date has not yet been confirmed.