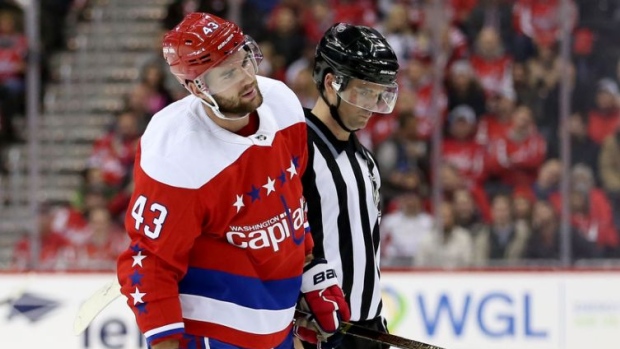 There will be no discipline hearing for Washington Capitals forward Tom Wilson regarding his check to the head against the New Jersey Devils Friday, according to a report from TSN Hockey Insider Bob McKenzie.

WSH has been told there will be no @NHLPlayerSafety hearing for Tom Wilson’s hit last night.

Wilson was issued a five-minute major and a match penalty in Friday’s game for an illegal check to the head of New Jersey Devils forward Brett Seney.

Seney left the game after the hit but later returned in the third period.

Wilson was suspended 20 regular games earlier this season on Oct. 3 after a preseason hit on St. Louis Blues forward Oskar Sundqvist, who missed the first eight games of the 2018-19 season with a concussion.

He appealed that suspension at a hearing on Oct. 18 but NHL commissioner Gary Bettman upheld it. Wilson filed a third appeal from a neutral arbitrator and on Nov. 13, his 20-game suspension was reduced to 14. He served 16 games of his suspension.

Wilson was suspended twice in the preseason last year for boarding and interference and during the 2018 playoffs for an illegal check to the head on Pittsburgh’s Zach Aston-Reese, who suffered a concussion and a broken jaw on the play. The Capitals would go on to the win the Stanley Cup with Wilson chipping in with 15 points in 21 games.

Since returning to Caps’ lineup post-suspension, Wilson, 24, has 13 points (seven goals, six assists) in nine games and the Caps are 8-1 with him.