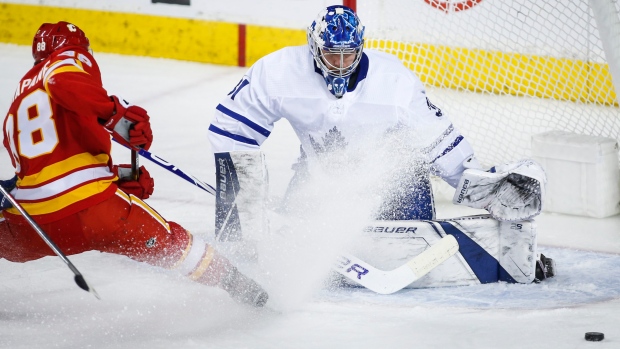 TSN Toronto reporter Kristen Shilton checks in daily with news and notes on the Maple Leafs, who held a 12:30 p.m. MT practice at Rogers Place in Edmonton on Friday ahead of Saturday’s game against the Oilers.

Maple Leafs head coach Sheldon Keefe maintains that he didn’t intend to ride goaltender Frederik Andersen into a seventh consecutive start against Edmonton on Saturday. But Andersen has played so well, it forced Keefe to change course, and deny backup Michael Hutchinson a planned start during the team’s current four-game road trip.

“To be honest, the Calgary start [on Thursday] was the one that we were looking at for Hutch,” Keefe said after the Leafs’ practice on Friday at Rogers Place in Edmonton. “And then the way the Vancouver game went [with Andersen’s 38-save performance], we felt we needed to go back with Freddie, and [will] again in this one here [on Saturday].”

Throughout the week, Keefe has referenced Toronto’s recent favourable schedule – with no back-to-backs and days off between games – as incentive to stick with Andersen. He doubled-down on that again Friday, pointing out the Leafs won’t play again after Saturday until Tuesday at home, when they host Buffalo.

The Leafs also brought in a third goalie for Friday’s practice, Edmonton local Marc-Oliver Daigle from the MacEwan University Griffins, to shoulder some of the reps and keep Andersen fresh.

“We've got time between this game and our next,” Keefe insisted. “Today is a lighter day and his workload hasn't been that great this week as a whole so we just feel like going back with him here is important.”

It did seem like if Keefe wanted an opening to rest Andersen, Saturday’s game would be the one to do it in. Andersen wasn’t at his best on Thursday, allowing three goals in 2:30 of the third period and posting an .833 save percentage in the 4-2 loss, which is enough of a dip from his previously strong play to consider a break.

But that’s not where Keefe’s head is at, even if Andersen is now on pace to make over 65 starts this season.

“I think really you just want to have your best guy in as often as you can,” Keefe said. “But without a doubt we want to be a team that eventually gets to a point where it doesn't matter who's in net.”

Part of the reason Toronto isn’t at that stage yet is the number of high-quality chances they’re giving up every night.

According to Natural Stat Trick, the Leafs have allowed 68 high-danger scoring chances in their last six games, compared to generating 48 of their own. On top of that, the Leafs have been struggling under Keefe in the third period, posting the NHL’s third-worst goal-differential (-10) in that frame since he took over the bench on Nov. 21.

Be that as it may though, Keefe sees the Leafs’ issues as running further than any 20-minute segment.

“For me, it's not just the third period,” he said. “I think third periods are where things catch up to you and the puck ends up going in your net but there's spurts of the game yesterday in the second period, and then of course in the Vancouver game as well [that weren’t good], so those are the things we need to get out of our game.”

It’s not necessarily puck management that’s burning Toronto either, but also an inability to stick to their structure when it matters most.

“It's more just the transitions, when the puck is free, when nobody really has it,” Keefe explained. “But maybe the opposition has the upper hand and they're about to get it and [for us it's about] how quickly we get ourselves into some defensive structure, so that we get the puck back quicker. Those are the pieces I think we're struggling with the most and that's what's opening up the game a little bit.”

When that happens, Auston Matthews thinks the Leafs would be better served through just making simpler decisions.

“I think we still have to find that happy medium where we're up a couple goals, or we're up a goal in the third period, and maybe not try to make a perfect play,” he said. “I think sometimes you just have to live to fight another day and chip the puck in and get in on the forecheck or something like that. So I think there's still something that we're kind of going through and learning through.”

The other part of the equation for Toronto to tighten up things in their own end is accepting that adversity will come, and approaching it with the right amount of mental toughness.

“It's not always going to go your way,” said John Tavares. “It's unfortunate we gave up one really early in the third [against Calgary] and it's really just regrouping as quick as we can, focusing on the next shift and trying to grab that momentum back and not let things get away from us like they did. It's no question something we talk about and we focus on. But we have to really dig in even more than we think we are and just continue to stick together and understand how important the next shift is.”

Keefe has tried to get the Leafs’ focus onto consistent defensive zone play since he took over, and he isn’t shy about admitting they have a long way to go as a team in that respect.

When the Leafs and Oilers clash on Saturday, there will be four former No. 1 picks between the two lineups: Tavares, Matthews, Connor McDavid and Ryan Nugent-Hopkins.

It’s not often so many highly-touted former prospects face off in a single game, and it’s not something the players themselves put much stock into. For Tavares, sharing a place in NHL draft history with Matthews has been a jumping off point to a different kind of conversation.

“I don't think specifically we talked about being the first pick, but I think we try to learn from each other in just how we play the game, how you approach it, how you try to be effective and how we continue to just try to get better,” Tavares said.

At 29 years old, and the first overall choice from the 2009 NHL draft, Tavares is the oldest of the top picks that will play in Edmonton. He was actually a coach for a camp McDavid participated in prior to becoming an NHL draftee himself, but Tavares knew the now-Oilers’ captain well before that, having both come up through the Greater Toronto Hockey League’s Toronto Marlboros.

“I met him when he was really young, when he was first entering junior and had a lot of attention on him,” Tavares said. “I don't know who was teaching him then how to skate but would have been nice if that was around when I was playing.”

The Oilers have been sliding a bit of late, losing three straight but still producing offensively with 10 goals in that stretch. Regardless of what the recent record shows, when McDavid and Leon Draisaitl are on the ice, they’ll have the Leafs' full attention.

“We know who we're up against and they don't need much, if really any room, to make something happen,” said Tavares. “So there's no reason to make it any easier for them. They're very dynamic; they're going to find ways to get the puck. We just have to defend well and really make them work for their opportunities and make sure we're not making it tough on our defence and our goaltending to have to deal with a lot of their time and space.”

“They obviously have a lot of good skill so it's important that we manage the puck and limit turnovers and try to take away from their transition game,” added Morgan Rielly. “They play with a lot of speed, so I think it's just really important that everyone is responsible with it, so we're not creating turnovers in our own zone and making sure that we're not giving up chances against.”

Trevor Moore took a regular line rush in Leafs practice on Friday for the first time since injuring his shoulder on Nov. 15, flanking Frederik Gauthier and Jason Spezza on the Leafs’ fourth line and looking primed to return from his 12-game absence.

Keefe wouldn’t confirm Moore’s status for Saturday, saying there were still some questions to be answered on a few players. But late Friday afternoon, the Leafs returned Nic Petan to the American Hockey League’s Toronto Marlies, opening the door for Moore’s return off Long Term Injured Reserve.

If Moore is still technically a game-time decision, Gauthier getting back in the lineup has been all but assured by Keefe. Gauthier has been a healthy scratch for the Leafs' last four games while Keefe said he was assessing some of Toronto’s other depth forwards to determine what the club might have in them moving ahead.