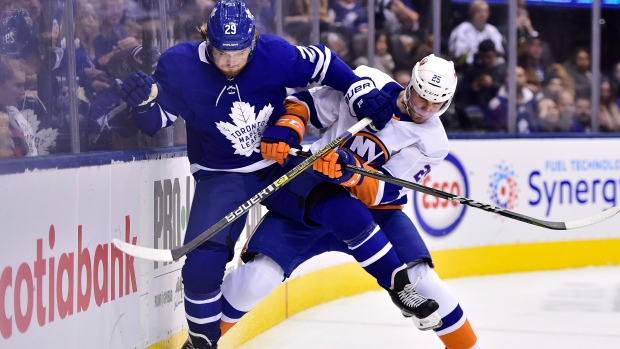 TSN Toronto reporter Kristen Shilton checks in daily with news and notes on the Maple Leafs. The team held an 11 a.m. practice at MasterCard Centre

William Nylander is still looking for his first goal of the season, a marker that will undoubtedly remove a sizable burden from his shoulders in the face of a slump that has reached 11 games. But before that happens, Nylander removed something else from his shoulder area – several inches of hair.

The 22-year-old returned to Toronto in early December with far longer locks than he left with last spring, but a visiting family member encouraged him to try a new look for the New Year.

“My aunt is in town and she cuts my hair, so I was like, ‘Yeah, we have to do it,’” Nylander said after the Leafs’ practice on Monday.

Nylander joked that “hopefully” the aesthetic alteration ends up having a positive effect on his game, which the winger freely admits isn’t where it should be.

Nylander has managed to notch just two assists, back on Dec. 11, in the month since he ended his contract stalemate with the Leafs and returned to action.

Nylander dipped into an old bag of tricks at Monday’s practice, using a weighed stick in some individual stickhandling and shooting drills to make his regular stick feel lighter and more fluid by comparison.

“I want to get better. I don’t think I’m happy with [my game] at all,” he said. “I’m working to get better every game and I feel like I’m coming [along] good. I feel like [my conditioning is] getting there. Felt better the last game. There are a few games where I’m getting the breathing back and stuff.”

Head coach Mike Babcock has avoided turning up the heat on Nylander by publicly stating the adjustment period he’s in was fully expected. That doesn’t mean that there's unlimited patience available.

“I don’t know about easing [him] in,” Babcock said of how he's handling the winger. “But you guys [the media] talked to him today? What do you think that does to a guy? What I think it does is, when you come back and you have an expectation for yourself and then it doesn’t go as good, it tends to put pressure on you. So how do you handle that? Don’t get in your own way, so just come and play hard and compete real hard.”

Babcock reunited Nylander on a line with Auston Matthews in the second period of Toronto’s loss to the New York Islanders on Saturday, and the coach kept his young stars together again at Monday’s practice.

Babcock stressed those arrangements may change before Thursday’s game against the Minnesota Wild.

When it comes to Nylander’s success, or lack thereof, so far, Babcock reiterated what he’s believed all along – everything will change for the better once Nylander can see himself as a scorer again.

Frederik Andersen is listed on the injury report as day-to-day with a groin injury, but on Monday he took part in a solo session with goalie coach Steve Briere before the team practice.

Andersen spent about 45 minutes with Briere, the first time he’s been on the ice since Toronto’s morning skate in Columbus on Dec. 23. They went through some stretching and an assortment of regular goalie drills.

With no game on the schedule until Thursday, Babcock remains cautious in regards to Andersen’s recovery.

“Freddie will practise tomorrow with Stevie [on the team’s day off], and then we’ll see how that goes,” he said. “I don’t know if he’s on the ice with us the following day or not on the ice, they’ll tell me. I don’t ask about those things. They tell me when they’re ready. We’ll go from there.”

Having returned Kasimir Kaskisuo to the Toronto Marlies after Saturday’s game, the Leafs welcomed back York University goaltender Alex Fotino to man a net for the morning. Fotino previously practiced with Toronto on Dec. 19.

Pressed on whether the Leafs will recall Kaskisuo again after the Marlies game on Monday afternoon, Babcock said there is no such plan in place as of now.

“Freddie is practising tomorrow. I’m going to see the next day,” he said. “Then if I have any information I’m going to share it with you.”

While Andersen has been battling his ailment, Garret Sparks has taken over starting duties in the Leafs’ last three games. He has a 2-1-0 record in that span and 6-2-1 record on the season. Sparks is relishing the opportunity to get more ice time, but was equally pleased to see Andersen making strides.

“He’s doing everything he can to make himself feel 100 per cent for this stretch run here,” Sparks said. “He’s a player. He’s going to do all that he can to be ready to help this team. And I think he’s doing a great job.”

2018 was an exceedingly memorable year for Sparks.

The 25-year-old was named the American Hockey League’s goaltender of the year for his sensational 31-9-1 season with the Marlies, and two months later led that team to the first Calder Cup championship in franchise history.

That helped Sparks earn the Leafs’ backup goalie job out of training camp, putting him in position to play the first full NHL campaign of his career.

Babcock said he’s not much for personal New Year’s resolutions, but made sure to impart on his team how much progress they’ve made through 2018 and how they can grow stronger in 2019.

“What I tried to impress upon the players today is we had a pretty good 2018, we won lots of games,” he said of the Leafs’ 26-11-2 record. “In saying all that, we now are in a spot that we expect more and would like to get more, so we have to improve on how we play if we’re going to get more.”

It’s been nearly two weeks since Zach Hyman injured his ankle against the New Jersey Devils on Dec. 18. On Monday he showed signs of moving towards a return by skating on his own with assistant athletic therapist Jon Geller before the Leafs’ practice.

Toronto initially said Hyman would be out a minimum of three weeks, and Babcock didn’t have any update on that timeline. He did, however, note that Tyler Ennis, who broke his ankle on Dec. 20, is “further back” than Hyman in regards to a return.