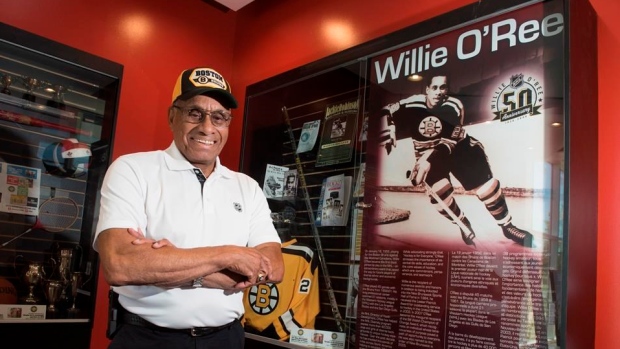 FREDERICTON — When Willie O'Ree donned a Boston Bruins jersey and jumped onto the ice at the Montreal Forum on Jan. 18, 1958, he had no idea he was making history.

Just a decade after Jackie Robinson broke the colour barrier in baseball, O'Ree had become the first black player in the National Hockey League.

Sixty years later, O'Ree looks back fondly on that game and a career in hockey that continues to this day.

"I didn't even know I broke the colour barrier until I read it in the newspaper the next day," O'Ree said while sitting in the stands of Willie O'Ree Place — a modern hockey arena, named in his honour, in his hometown of Fredericton, N.B.

While O'Ree didn't score during that game, his Bruins beat the Canadiens 3-0. He would play just one more game with the Bruins that season.

"Back then, none of the players wore any helmets, no face shields, no cages, so there was no protection on your face. There was a slapshot, and I'm on the ice in front of the net. A ricochet came up and the puck struck me in the eye. I lost 97 per cent vision in my right eye. I was out of action for about six weeks," he said.

Doctors told him he would never play again. But O'Ree never told his coaches or even his parents about the extent of his injury and he resumed playing.

The next season he was called by coach Punch Imlach to go to the Quebec Aces training camp in Quebec City.

"I went up and made the team but I didn't disclose that I couldn't see out of my right eye. I said if I'm good enough to make the team with one eye, just don't tell them," he said.

The team won the championship that year, and for the next two seasons O'Ree tried out at the Boston Bruins training camp, finally getting the call to play in the NHL in January 1958.

O'Ree said he knew people were pointing at him during that first game, and he was nervous, but once he got into the action, he just concentrated on the game.

He said colour was an issue when he played in junior and he would often be subjected to racial slurs and remarks, but he had learned from his older brother to ignore them and just go out and play hockey.

"He said 'Willie, just forget about these racial remarks because you can't change the colour of your skin and you wouldn't want to even if you could'."

O'Ree said players on other teams would often make racial comments, but everyone in the Boston Bruins organization was very supportive, especially coach Milt Schmidt and general manager Lynn Patrick.

His number 22 was never retired, and a few players have worn it, including Anson Carter, a Barbadian-Canadian who played four years for Boston and asked to wear it.

O'Ree said that made him feel good, and he gets a lot of satisfaction seeing players like P.K. Subban of the Nashville Predators in the league today.

Subban said he has O'Ree to thank for opening the door.

"Everybody knows he was the first black hockey player and what he stands for, and not only that but as one of the great human beings to come to the NHL in league history," Subban said following a recent game-day practice in Nashville.

While growing up, O'Ree says his hockey role models were Gordie Howe and Rocket Richard. Now with 31 teams in the league, his pick is Sidney Crosby.

"He plays the game, plays it hard, and loves the game. He shows it when he's on the ice," O'Ree said.

O'Ree was traded by the Boston Bruins and played in other leagues for teams in Ottawa, Los Angeles and San Diego — where he continues to live.

O'Ree said he tells young people to feel good about themselves and have the kind of positive attitude that allowed a young man from Fredericton to play the game he loved.

"They can do anything they set their mind to do. If you think you can, you can," he said.