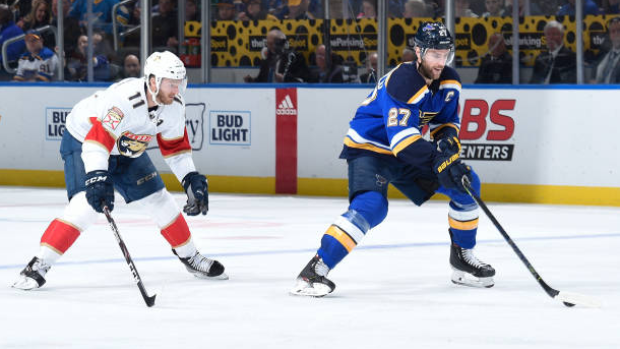 The Vegas Golden Knights and Toronto Maple Leafs have been linked to Alex Pietrangelo if the star blueliner hits the open market, but TSN Hockey Insider Pierre LeBrun believes the Florida Panthers may be a dark horse to land the St. Louis Blues captain in free agency.

LeBrun wrote in The Athletic on Monday that after moving Mike Matheson in a deal with the Pittsburgh Penguins last week, he believes the Panthers will make a run at Pietrangelo to improve their defence.

Pietrangelo, who scored a career-high 16 goals and added 36 assists in 70 games this season, is TSN's top-ranked free agent ahead of Oct. 9. TSN Hockey Insider Darren Dreger reported earlier this month that talks with the Blues had broken off, but LeBrun writes that some expect general manager Doug Armstrong to take at least one more run at re-signing the team's captain.

TSN Senior Hockey Reporter Frank Seravalli confirmed Monday that there has been "significant interest" from teams looking to acquire Torey Krug's rights from the Boston Bruins ahead of free agency.

Seravalli adds that the belief is the Bruins latest offer to Krug was a six-year contract at a $6.5 million cap hit.

Sounds like there has indeed been significant interest in teams trading for Torey Krug's rights (@RearAdBsBlog on the case). My belief is last offer from #NHLBruins to Krug's camp was 6 years x $6.5 million.

Krug, No. 3 on TSN Hockey’s Top 75 Free Agents list, posted nine goals and 49 points in 61 games this season. He added six assists in 13 games during the Return to Play.

The 29-year-old has spent his career with the Bruins since signing with the team out of Michigan State University in 2012. He is coming off a four-year, $21 million contract.

Speaking to LeBrun for The Athletic, Arizona Coyotes general manager Bill Armstrong said he is not actively shopping Oliver Ekman-Larsson, though trade rumours continue to surround the 29-year-old defenceman.

“Well, I think other people have really pushed it out there,” Armstrong said. “But he’s our captain. He plays 23 minutes a night. I’ve heard his name splashed around everywhere but I can tell you I haven’t splashed his name around. I can tell you that. He’s a good player for this organization, I’m a big fan of his, just watching him and how he’s got better and better.

Ekman-Larsson, listed at No. 4 on the latest TSN Trade Bait board, had nine goals and 30 points in 66 games with the Coyotes last season. He had one goal and four points in nine playoff games as Arizona lost in five games against the Colorado Avalanche in the first round.

Drafted sixth overall by the Coyotes at the 2009 NHL Draft, Ekman-Larsson has seven years remaining on an eight-year, $66 million contract with an AAV of $8.25 million.