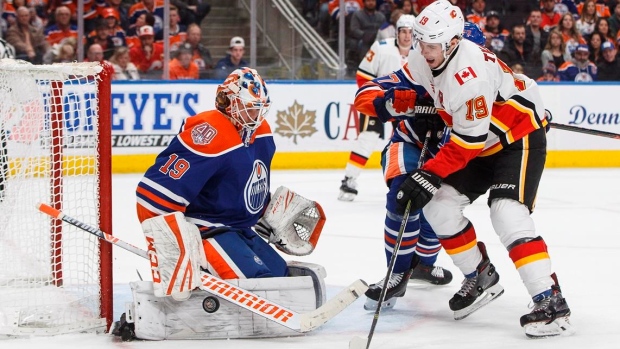 The six-foot-seven Finnish goalie was taken 31st overall by the New York Islanders in the 2009 draft but logged just four games with the franchise before returning to Europe in 2011. Koskinen thought he'd be back in North America the following season but instead landed with the SKA St. Petersburg in the Kontinental Hockey League.

"I felt that I could get better there every year so it was the perfect set up for me," he said. "I really loved my time there."

Last season, he posted a 1.57 goals-against average and a .937 save percentage with the Russian team. He also started feeling like he needed another challenge.

"And that's why I'm here," Koskinen said Sunday in Vancouver before his Edmonton Oilers took on the Canucks.

The 30-year-old signed a one-year, US$2.5-million contract with the Oilers on May 1.

While the deal may have raised some eyebrows, Koskinen's success this season has quieted the questions.

He's posted a 11-3-1 record with three shutouts, and is currently one of the league's top netminders, boasting a .930 save percentage and a 2.12 GAA.

Koskinen was brought in to backup veteran Edmonton netminder Cam Talbot but his hot streak has left the pair splitting starting duties.

"You need two goalies that can stop the puck," he said. "If you don't have that, you can't win in the west. There's too much travel, too many hard games, too many three and four nights with big travel. You need competent guys."

Both men have their strengths, the coach added, noting that Koskinen has seen more in-zone scoring chances this year, while Talbot has seen more off the rush.

Edmonton has gone 9-2-2 since Hitchcock replaced Todd McLellan as bench boss on Nov. 20 and Koskinen has tallied seven wins over the same stretch.

The performance has earned praise from his teammates, but the goalie hasn't allowed the kind words to go to his head.

"You have to earn the respect of the guys every day on the ice in practice and every day in games. So you can't be satisfied at any moment," he said.

Koskinen said he didn't set any real expectations for his NHL return.

The league has a different style of play than the KHL, the goalie added, with players putting more pucks on net.

He's worked with Oilers goaltending coach Dustin Schwartz to improve various aspects of his game, from tracking the puck to watching his angles.