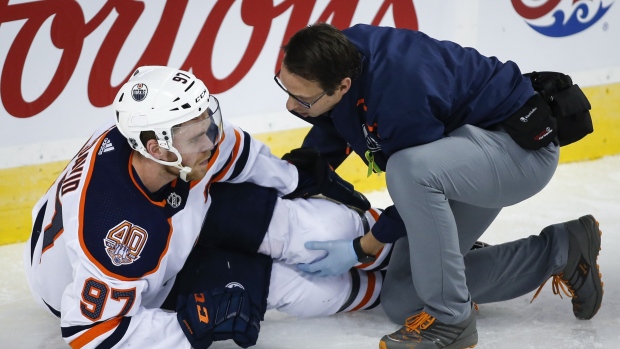 Connor McDavid, left, has his knee tended too after crashing into Calgary Flames goalie Mike Smith , The Canadian Press

The Edmonton Oilers announced late Friday that their medical staff, in collaboration with top orthopedic specialists, have determined that McDavid can begin rehabbing his injured leg, although they did not confirm what the exact injury is or how much time will be needed for a full recovery.

McDavid left Edmonton's 3-1 victory over Calgary on April 6 with a left leg injury after crashing into the Flames net in the second period.

Oilers CEO Bob Nicholson confirmed McDavid had an MRI following the incident and at the time said the team was "still evaluating it but it's not as serious as we thought."