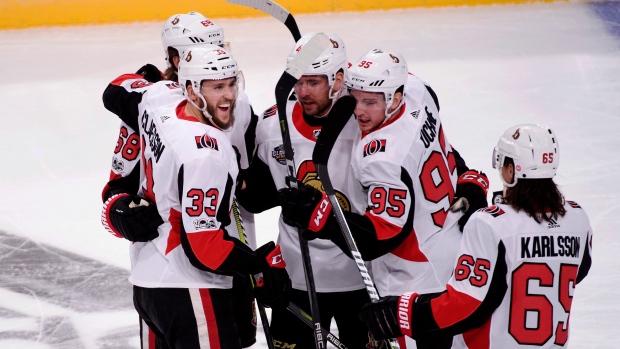 STOCKHOLM — Before newcomer Matt Duchene can fully fit in, the Ottawa Senators still have others to make the difference.

On Friday night, Mark Stone scored in regulation and again in overtime to give the Senators a 4-3 victory over the Colorado Avalanche in the first of two regular-season games in the Swedish capital.

Stone scored 59 seconds into overtime for his 11th of the season.

"I had a good summer, just like to move in and play consistent hockey," Stone said. "And our team has been successful offensively. We do the right things."

MacKinnon tied it for Colorado with 7:07 remaining in regulation.

"We've found some solid chemistry and we showed that again," MacKinnon said. "It's a matter of burying more of our chances."

Ottawa coach Guy Boucher was happy with his team's defence, allowing the Avalanche only three shots on goal in the second period and five in the third.

"That's what we needed to do," Boucher said. "I liked the way we reacted when they scored. Nothing changed, the guys kept their focus and calm."

The teams will complete the NHL Global Series in Stockholm on Saturday night. It's for the fifth time the NHL has played regular-season games in Europe, but the first since 2011.

NHL Commissioner Gary Bettman said Friday he hoped "to establish a more regular and predictable presence for our international events" but didn't give any details.

The capacity crowd of 13,000 spectators at Stockholm's Ericsson Globe cheered loudly for both teams, each led by Swedish captains — Colorado's Gabriel Landeskog and Ottawa's Erik Karlsson — and some other Swedish players were on the ice to please the fans.

Yakupov opened the scoring on a power play 8:16 into the game. Just 20 seconds later, Claesson gave the home crowd a reason to cheer again with a slap shot from above the left faceoff circle to tie it. It was the first point of the season for Claesson.

"It means a lot (to play at home)," Claesson said. "Especially in front of our families and friends and relatives. It's really fun."

Karlsson had two assists for a total of 15 points in 10 games.

Ottawa rallied with Stone redirecting a shot past Semyon Varlamov with 4:50 left in the opening period. Another home crowd hero, Johnny Oduya, had an assist on the goal.

Kerfoot tied it at 2 midway through the second, redirecting Blake Comeau's shot.

Kerfoot also had an assist.

DiDomenico restored a one-goal advantage for the Senators, sweeping a rebound past Varlamov — who fumbled a shot from Dion Phaneuf — with 6:38 remaining in the second.

After the Senators acquired Matt Duchene from Colorado on Sunday as part of a three-way deal that included sending Kyle Turris to the Nashville Predators, the centre led the first line with forwards Mike Hoffman and Zack Smith.

Duchene who had four goals and 10 points this season through 13 games with the Avalanche didn't get a point but was a threat Friday. The third overall pick in 2009 has 178 goals and 250 assists in 586 games, all with Colorado.

He's got all the support and time in Ottawa to get used to new teammates and environment.

"It's gonna take him some time to adjust to the way that we play and the system we play," Karlsson said.

"It's not an easy situation to be put in. We gonna have to give him a little bit of time to reach the potential that we all know he has.

"When you look at him you see the type of player he can make," Stone said. "He gets the puck, he makes things happen."

"We're more than happy to have him for sure," Boucher said.