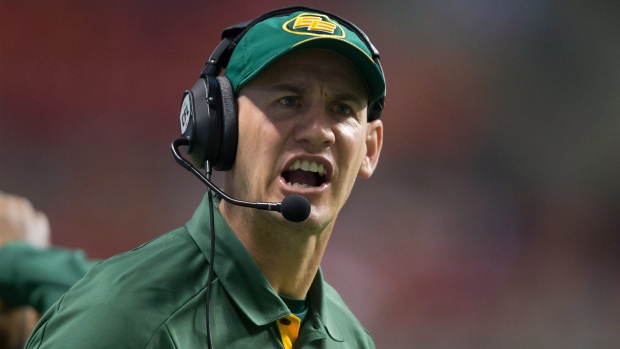 TSN Football Insider Dave Naylor reported Thursday he's hearing Maas has completed a deal to join the Roughriders as their new offensive coordinator, replacing Steve McAdoo, whose contract will not be renewed.

Hearing Jason Maas as @sskroughriders OC is a done deal and has been for at least a couple of days. Maas has been in Regina since Wed to begin putting together a staff alongside HC Craig Dickenson. Obviously, last season’s OC, Steve McAdoo is not having contract renewed. #Riders

Naylor reported earlier Thursday that the Ottawa Redblacks had ruled out Maas in the search to fill their vacancy. He added that Calgary Stampeders quarterbacks coach Ryan Dinwiddie remains in consideration for a second interview and is one of at least seven potential candidates interviewed in the first round of the team's search. That list includes Mike Benevides, Bob Dyce, Mark Washington, Paul LaPolice, Mark Kilam and Steve McAdoo.

Correction: @calstampeders QB coach Ryan Dinwiddie remains in consideration for a second interview as head coach with Ottawa. He is one of at least 7 interviewed in first round, along with Benevides, Dyce, Washington, LaPolice, Kilam and McAdoo. #CFL #Redblacks.

Maas, 44, was fired by Edmonton last week after four seasons with the team. Edmonton posted a 8-10 regular season record in 2019 before losing to the Hamilton Tiger-Cats in the East Final.

BC Lions general manager Ed Hervey revealed earlier this week that he had been in contact with Maas regarding the Lions' offensive coordinator opening under new head coach Rick Campbell.

"We've been in contact with him but we also understand that Jason will be in very high demand for anyone looking for an OC," Hervey told TSN Radio 1040 Vancouver on Monday. "Again, the Ottawa head coach situation hasn't been addressed yet, and I'm not certain what they're planning to do there, but I would image that would be an intriguing opportunity for Jason as well if given the opportunity. We do have a long standing relationship, as does Rick with Jason but we also won't take that for granted. If we could get a coach of Jason's quality in here and obviously we know he has a great working relationship with Mike Reilly. Again, if that's the direction that Rick wants to go, it would be something that would be seen as an extreme positive on all fronts.”

TSN's Farhan Lalji reported last week the Redblacks would be interviewing Dinwiddie as well as Stampeders special teams coordinator Kilam for their head coach position. The Lions, meanwhile, have also talked to Dinwiddie about a role on their staff.

The Redblacks are expected to interview Winnipeg Blue Bombers offensive coordinator LaPolice on Thursday and interviewed former BC Lions head coach Benevides on Wednesday, according to Lalji.