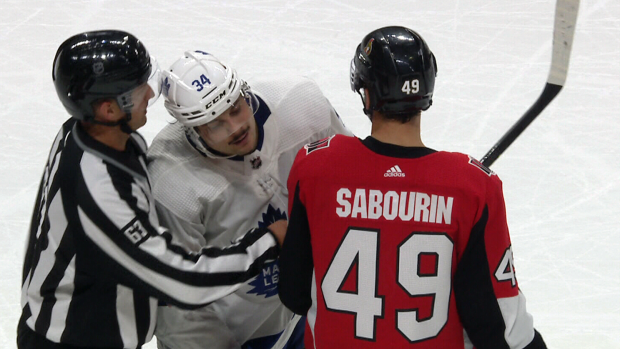 After literally fighting his way through the minors, the feisty forward will play his first NHL game on Wednesday as a member of his hometown team — the Ottawa Senators.

Sabourin attended Senators training camp on a professional tryout and impressed management enough to earn a one-year, two-way contract and a roster spot for opening night against the host Toronto Maple Leafs.

"It's been a long, hard road," admitted the 27-year-old. "I just kind of stuck with it and things seem to be paying off.

"I guess if I had the opportunity when I was 20, I might be a little more nervous about it, but because I've been playing pro so long, I think I finally get it. I think maturity is a lot of what helped me get here so I'm just going to take it as another day, another game and go out and do my best."

Over the years, there were times Sabourin questioned whether it was worth it to keep playing.

"I've always hoped and always just kept working," he said. "All you can control is your work ethic and that will dictate your play so I just tried to take it day-by-day and put my best foot forward and luckily it's led me here."

Sabourin, who will play on the fourth line with Jean-Gabriel Pageau and Filip Chlapik or Mikkel Boedker, understands his role is to bring some physicality and play a gritty style.

Many have questioned why the Senators kept a player best known for throwing punches, while some of the organization's top prospects were sent to their AHL affiliate in Belleville, Ont.

"I knew he was a tough kid, but he proved he could get on the forecheck and he could create some action out there and keep some guys off to allow some of our guys to play hockey," said Senators head coach D.J. Smith, who coached Sabourin in junior with the Oshawa Generals. "Just being tough, you can't be in the National Hockey League, you've got to be able to play the game and I thought he was able to handle the pace well.

"He wouldn't have made the team on just toughness. He had to prove he could get up and down and forecheck."

"He did it the hard way," said defenceman Mark Borowiecki. "You've got to respect a guy who's been through the trenches and played that role in the minors. It's not easy. Fighting up here, there's a little bit of glory. You're on TV, people notice you and your buddies see it.

"When you're down in the minors doing it and getting your face punched in and riding the bus after, it's no fun. He stuck with it and worked his butt off and it's something to celebrate for sure. It's not every day a guy can turn a minor-league career and a (professional tryout) into a roster spot on opening day."

Sabourin earned a little notoriety following a pre-season game with the Leafs when he exchanged a few words with Toronto's Auston Matthews.

The Maple Leafs' star centre proceeded to look over Sabourin's shoulder to see the name on the back of his jersey, seemingly implying he didn't know who Sabourin was.

The video went viral and suddenly a lot more people knew all about Sabourin.

"Twitter can be a crazy world nowadays so a little thing like that happens and it blows up, but I guess any exposure is good exposure at this point," said Sabourin. "It was what it was. I enjoyed it and had a good chuckle about it."

Matthews' actions didn't make everyone laugh and Borowiecki was one of them.

"I thought it was a little disrespectful to be honest," said Borowiecki. "We're not all blessed with Auston Matthews talent unfortunately, but I truly wish I was. Some of us have to do it the hard way. I don't have his God-given talent and I'm sure (Sabourin) would tell you he doesn't either and for some of us we don't get the accolades or the glory, but we're still legitimate hockey players and we've worked a lot and sacrificed a ton to get here."

Meanwhile, the Senators announced Craig Anderson will start in goal in Toronto.

This report by The Canadian Press was first published October 1, 2019.