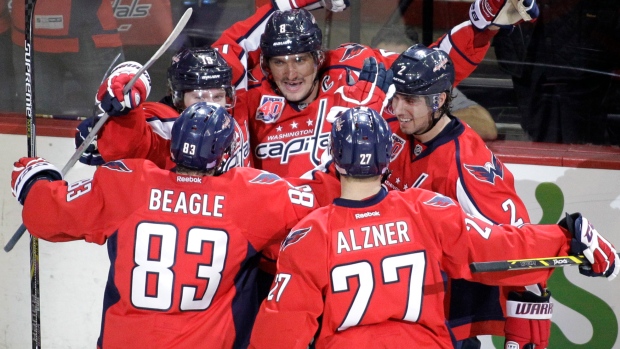 WASHINGTON - The Washington Capitals dropped five in a row before putting together a winning streak that now stands at three.

One of these days, perhaps the Columbus Blue Jackets will experience a similar reversal of fortune.

Alex Ovechkin and Marcus Johansson each scored two goals, and the Capitals beat Columbus 4-2 on Tuesday night to extend the Blue Jackets' skid to nine games.

Braden Holtby stopped 24 shots, including all 11 in the third period, to help the Capitals reach a season high in consecutive victories.

"The game is all about momentum," Washington coach Barry Trotz said.

The Blue Jackets know this too well. Unfortunately, they're stumbling in the wrong direction.

Columbus has been outscored 39-18 during an 0-8-1 stretch that began Oct. 24. The winless drought equals the longest in franchise history, set in December 2009 when the club went 0-7-2.

"We've been doing good things every single game, but we have to find a way to win," centre Ryan Johansen said. "We create opportunities for ourselves and hit a crossbar or miss the net or they make a good save. We'll just look at the positives and try to build off that."

Even though the Capitals took the lead for good on a goal by Johansson with 66 seconds elapsed, they never could pull away — even after Ovechkin scored twice during a nine-minute span of the first period to make it 3-1.

It was a one-goal game before Johansson scored on a wraparound at 14:39 of the third period to clinch it.

Cam Atkinson and David Savard scored for the injury-plagued Blue Jackets, who can't help but wonder if every game during this stretch is a replay of the one that preceded it.

"You've got to get that winning feeling back," defenceman James Wisniewski said. "You get that 'here we go again' attitude, but you can't think like that. The mind is powerful, and if you think bad things are going to happen, they will."

The Blue Jackets played a seventh straight game without top goaltender Sergei Bobrovsky, who has a broken finger. Curtis McElhinney started in his place and was pelted with 31 shots in falling to 0-5-1.

Those remaining are trying their best to make up the difference.

"I don't think it's a lack of effort," Wisniewski said. "It's some kind of weird funk. I really don't have any answers."

After being outscored 4-0 in the first period of their last game, a 7-4 loss to Tampa Bay, the Blue Jackets again struggled during the opening 20 minutes.

Soon after Johansson scored his seventh goal of the season from the left side of the net, the Capitals went to a 5-on-3 power play. Ovechkin connected from the left circle with a shot that soared over McElhinney's right shoulder at 7:49.

Columbus closed to 2-1 at 9:52 on a wrist shot by Atkinson off a faceoff in the Washington zone.

But Ovechkin struck again at 16:04, taking a drop pass from Jay Beagle and beating McElhinney with a blast between the circles for his eighth goal.

The Blue Jackets have been outscored 18-10 in the first period this season.

Savard registered the lone goal of the second period with a shot that Holtby kicked into the net with the back of his skate during a collision with a teammate and Columbus centre Boone Jenner.

But the goalie made up for it with a flawless third period.

"Braden had to give us a period, and he did," Trotz said. "He bailed us out in the third. Hopefully, that's something that gets him rolling forward, something he can build his game on."

Notes: Washington has won four straight at home against Columbus. ... The Blue Jackets are 1-7-1 when the opposition scores first. ... Nicklas Backstrom and Andre Burakovsky each had two assists for Washington. ... The Capitals have seven power-play goals in their last seven games.