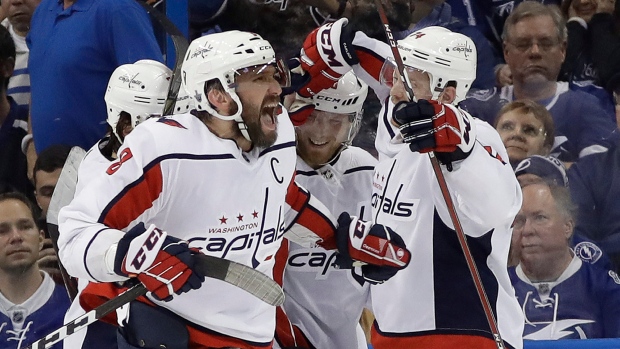 Just like that, they're in a full-on sprint toward the finish.

The Capitals scored in the opening minute of the game and twice in the last 1:02 of the second period Sunday night to pull away to a 6-2 victory over the Tampa Bay Lightning and a 2-0 lead in the East final.

"It's huge but it's not over yet," Ovechkin said. "We played hard and played smart. You can see all four lines doing their job."

Evgeny Kuznetsov and Lars Eller each had a goal and two assists. Ovechkin and Tom Wilson had a goal and an assist apiece for the Caps, who took the first two games of the best-of-seven matchup on the road. Since 1974-75, teams that take a 2-0 lead in the conference final or semifinal have a series record of 39-2 (95.1 per cent).

"We didn't panic. Just stayed to the system and played the right way," Ovechkin said. "We stayed calm and waited for our opportunities."

Devante Smith-Pelly and Brett Connolly also scored, helping Washington improve to 7-1 on the road this post-season. It's their first visit to the conference final during Ovechkin's 13-season career.

"You're on the road and it's us against them, and this group has really bonded," coach Barry Trotz said. "They've got a lot of resiliency, and they're having fun."

Game 3 is Tuesday night in Washington.

The Lightning had the best record in the Eastern Conference this season and breezed through the first rounds of the playoffs against New Jersey and Boston.

Little has gone right against the Capitals.

"For a team that's been used to being able to make some plays, we sure haven't made them in these two games. It's very uncharacteristic of us. That's the difference. They've made plays, we haven't. And it's cost us," Tampa Bay coach Jon Cooper said.

Brayden Point and Steven Stamkos had early power-play goals for Tampa Bay, which rebounded after falling behind on Wilson's goal 28 seconds into the game.

Smith-Pelly's one-timer finished an odd-man rush and made it 2-2 at 2:30 of the second period. The Caps took control when Eller scored with 1:02 remaining and Kuznetsov — with assists from Ovechkin and Eller — delivered on a power play less than a minute later.

Tampa Bay goaltender Andrei Vasilevskiy was called for tripping Andre Burakovsky with 10 seconds left in the period. Kuznetsov scored seven seconds later to make it 4-2, the second time in the series the Caps stunned the Lightning with a power-play goal in the closing seconds of a period.

Ovechkin and Connolly finished the rout with third-period goals. Braden Holtby stopped 33 of 35 shots to improve to 10-3 this post-season.

"We've defended this entire playoffs up until these last couple of games, and that's why we've had success," Stamkos said. "We haven't defended with the same urgency. We're leaving our goalie out to dry."

Ovechkin also had a goal and an assist in Washington's 4-2 victory in Game 1.

Vasilevskiy was pulled from the opener after facing 25 shots in two periods, but the Lightning didn't pin the loss on him. Instead, they vowed to play harder in front of the young goaltender, who finished with 31 saves in Game 2.

Tampa Bay benefited early from a couple of questionable penalties — Wilson for goaltender interference and T.J. Oshie for high-sticking Victor Hedman, when the Tampa Bay defenceman actually was struck by the puck — to score twice in just over three minutes on the power play for a 2-1 lead.

Stamkos and Hedman assisted on Point's goal at 7:08 of the first. Stamkos' fourth goal in five games gave Tampa Bay its first lead of the series.

The Lightning will have to turn the series around on the road to return to the Stanley Cup Final for the first time since 2015.

"We'll prepare for the toughest game that we've played all season," Stamkos said. "It's gut-check time. Let's see who we really are."

NOTES: Washington's John Carlson had two assists, giving him 14 points (three goals, 11 assists) this post-season. That's a club record by a defenceman in one playoff year. He had been tied for the most with Kevin Hatcher (5-7-12, 1988), Scott Stevens (1-11-12, 1988) and himself (5-7-12, 2016). ... Before Sunday night, the Lightning had won Game 2 of a series five consecutive times after losing Game 1. They're 4-2 in six previous series in which they lost Game 1, with those series losses coming in the first round in 2014 against Montreal and the 2015 Stanley Cup Final against Chicago. ... Capitals C Nicklas Backstrom, who took a shot from Justin Schultz off his right hand in Game 5 of Washington's second-round series against the Penguins, missed his third straight game. He took part in the morning skate on a limited basis and remains day-to-day. ... Hedman has a franchise-record, seven-game point streak (eight assists). Martin St. Louis had a six-game streak in 2004.