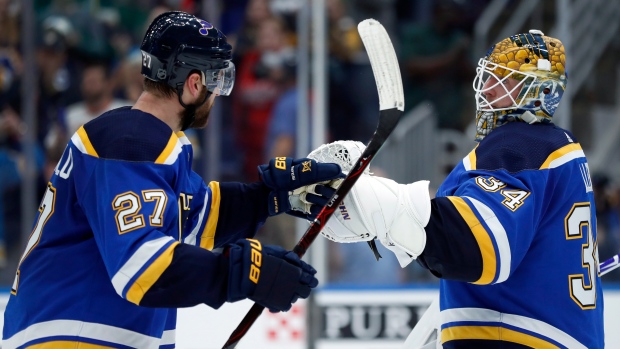 ST. LOUIS — Robert Bortuzzo got mad for the St. Louis Blues, and teammate Oskar Sundqvist got even with the Washington Capitals.

Alex Ovechkin scored his 30th goal of the season but the Blues came back to beat the Capitals 5-2 on Thursday night after Sundqvist knocked in the go-ahead goal.

Ovechkin's first-period score snapped a six-game drought and tied him with Mike Gartner as the only players in NHL history to begin their careers with 14 straight 30-goal seasons. Gartner scored 30 or more in his first 15 seasons for Washington, the Minnesota North Stars, the New York Rangers and Toronto from 1979-94.

"He's just an elite, elite scorer that we're so fortunate to have on our team and, jeez, the league is even fortunate just to have this type of a player that's a generational talent," Capitals coach Todd Reirden said. "To score 30 again this year is quite an accomplishment after going through a long season last year, and he continues to get a year older but he still does the phenomenal things."

Ovechkin wasn't in a reflective mood following the loss.

"It's nice to be in that company (with Gartner) but still a long way to go (in my career)," he said.

Sundqvist's goal stood as the game-winner. Sundqvist missed the first eight games of the season with head and shoulder issues after a hit from Washington's Tom Wilson in a preseason game on Sept. 30.

Wilson ended up being suspended 14 games. Bortuzzo and Wilson got into a fight early in the second period.

"I don't know whether he expected it or not," Bortuzzo said. "I think he would have done the same thing on his side and I'm sure a lot of guys would have stepped up in this locker room. I just happened to be the guy and it is what it is."

Alex Pietrangelo had a goal and an assist for the Blues, who stopped a two-game skid. Colton Parayko, Robert Thomas and Tyler Bozak also scored, and Jake Allen made 23 saves.

Brett Connolly scored for the Capitals, who had won five road games in a row. Braden Holtby had 37 saves but lost to St. Louis for the first time in his career (7-1-0).

Parayko's power-play goal tied it at 2 with 7:37 left in the second period. That ended an 0-for-21 slump with the man advantage on home ice for the Blues spanning seven games.

"We just outworked them, especially in the offensive zone," Pietrangelo said. "The penalty kill was good. The power play was good in the second period there. I think we simplified and started getting shots and all of sudden momentum started to change."

Sundqvist gave St. Louis a 3-2 lead with a diving sweep of a rebound off Pietrangelo's shot from the point with 3:27 remaining in the second.

"He got the shot through and I saw the puck and the diving during the shot was more to be sure I would be first to the puck," Sundqvist said.

Pietrangelo and Bozak added insurance goals in the third.

Thomas deflected Bortuzzo's slap shot past Holtby at the four-minute mark of the first to give the Blues a 1-0 lead.

After Ovechkin tied it, Connolly gave the Capitals a 2-1 advantage three minutes into the second, poking a rebound of his own shot past Allen.

NOTES: Blues RW Vladimir Tarasenko (illness) did not play. ... Capitals C Evgeny Kuznetsov is one point shy of 300 for his career. ... The Blues acquired G Jared Coreau from the Anaheim Ducks for future considerations. Coreau was assigned to San Antonio of the American Hockey League. ... Capitals RW Dmitrij Jaskin played for the Blues from 2012-18.

Capitals: At the Dallas Stars on Friday.