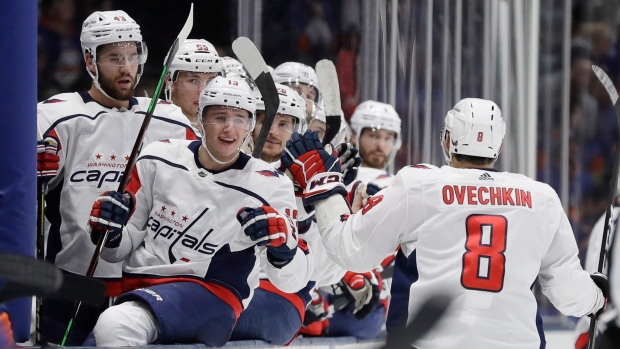 UNIONDALE, N.Y. — Alex Ovechkin added to his lengthy list of accomplishments with another big goal.

Washington's captain became the first player in NHL history with 10 seasons of 45 goals or more, scoring in the Capitals' three-goal third period as they rallied to a 3-1 victory over the New York Islanders on Friday night.

Jakub Vrana and T.J. Oshie also had goals, Braden Holtby stopped 20 shots and the Capitals extended their winning streak to three while tying the Islanders for first place in the Metropolitan Division.

"His ability to score goals, create offence is something that I have never seen before," Oshie said of Ovechkin. "There are greats in the league, but none that I have seen that are such a natural prolific goal scorer. . It goes to show how special of a player he is."

Tom Kuhnackl scored for the Islanders and Thomas Greiss made 26 saves, but New York fell for the second time during its current five-game homestand (1-2-0).

"It's hard to match the night before," said Islanders captain Anders Lee, referring to New York's 6-1 win Thursday night over former star John Tavares and the Toronto Maple Leafs. "We were up, we were ready to go. We put ourselves in a position to win and then things got away from us."

Ovechkin improved his individual point streak to eight games with his 45th of the season at 4:34 of the third period. Lee was serving a two-minute interference penalty when Ovechkin batted the puck out of midair to help the Capitals take a 2-1 lead. Oshie and Evgeny Kuznetsov assisted on the play.

Just 1:08 before Ovechkin's record-setting tally, Vrana evened the score at 1 with his 19th of the season. The Czech forward found a loose puck during a scramble in front of the net. Niklas Backstrom and Michal Kempny assisted on the play.

"It was an extremely competitive game," Capitals coach Todd Reirden said. "We didn't have success to start the game, but we stayed the course. We didn't change how we played. We continued to play the same way the rest of the game till we were rewarded. It was an important team win for us."

The Islanders — coached by Barry Trotz, who led the Capitals to the Stanley Cup title last season — opened the scoring at 2:43 of the first period when Kuhnackl converted a nifty forehand backhand to deke after intercepting a pass from Washington defenceman Dmitry Orlov. It was Kuhnackl's fourth of the season.

The play was close to being offside, but it appeared Kuhnackl did not touch the puck while entering the offensive zone until teammate Leo Komarov cleared the blue line. The Capitals' coaching staff elected not to challenge the play.

"He (Kuhnackl) stopped skating, our guy stopped skating, the crowd went silent, it just kind of froze me a little bit, I didn't know what was going on," Holtby said of the odd sequence. "Strange play. We are lucky it didn't hurt us."

Kuhnackl dressed for the game instead of veteran Andrew Ladd. The alternate captain skated in the previous two games for the Islanders, since returning from a lower-body injury which sidelined the veteran since mid-November.

Islanders forward Josh Bailey inadvertently passed the puck into his own net at 18:32 of the third period when New York pulled its goalie in favour of an extra attacker. Oshie got credit for the goal.

The Capitals have earned a point in 16 of their last 21 games against the Islanders, and are 23-10-4 against Eastern Conference Opponents this season.

NOTES: The Islanders announced before the game that F Matt Martin suffered an upper-body injury and is day-to-day. ... New York D Thomas Hickey was scratched for a second straight game after returning from an upper-body injury earlier this week. ... Islanders F Ross Johnston was in uniform for the first time since Jan. 12. ... This was the Capitals' first trip to Nassau Coliseum since Game 6 of the first round of the 2015 Stanley Cup playoffs. ... Capitals scratched D Christian Djoos, F Dmitrij Jaskin and F Chandler Stephenson.