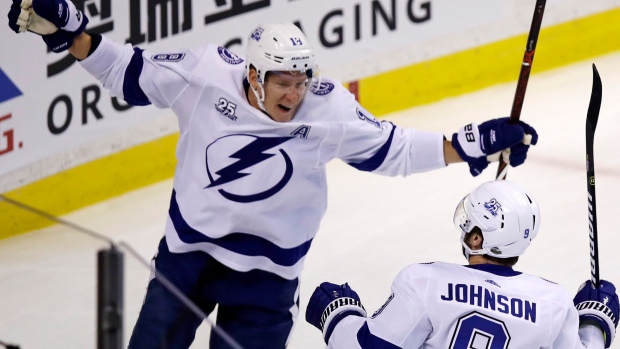 BOSTON — Between the birth of his first child in Tampa Bay and Game 3 of the Eastern Conference semifinals in Boston, Yanni Gourde squeezed in what could be his last nap for a while.

The Lightning forward spent the night with his wife and newborn daughter in the hospital on the off-day and flew to Boston on Wednesday. He missed the morning skate, but was waiting for his teammates at lunch.

He received quite a greeting.

"It was like we scored a game-winning goal," coach Jon Cooper said after Ondrej Palat scored twice and Gourde assisted on Tampa Bay's third goal in a 4-1 victory over Boston that gave the Lightning a 2-1 lead in the series.

Palat scored twice in the first 3:19 of the game, and Andrei Vasilevskiy stopped 28 shots to help Tampa Bay to its second win in a row since losing the series opener at home.

"Boston came in and took one of our games at home, we had to take one of theirs on the road," Cooper said. "We did that."

After Patrice Bergeron made it a one-goal game, Anthony Cirelli scored his first career NHL playoff goal to give the Lightning a 3-1 lead late in the first. Gourde provided an assist, chasing the puck into the zone before finding Cirelli in the slot.

"The last 24 hours have been amazing," Gourde said. "Obviously, I wanted to be there for my wife and, I think, it ended up it was perfect."

Tuukka Rask made 33 saves for Boston.

"Playoffs are desperate hockey," Bruins defenceman Charlie McAvoy said. "You don't ever go into any games saying 'Oh, we have the luxury of being able to lose this one.' That's not how it goes."

Palat scored just 1:47 in after Boston defenceman Matt Grzelcyk settled the puck with his glove in his own end, then appeared to lose track of it and skated away, leaving the Lightning with an easy 2-on-1 opportunity.

Palat made it 2-0 just 92 seconds later on a shot that deflected off Bruins defenceman Torey Krug and into the net.

"It's not good, obviously, but we've come back a lot," said Bruins coach Bruce Cassidy, whose team has won 21 games this season in which it gave up the first goal.

"So this is nothing new," he said "You've still got 50-some minutes left. There's going to be a lull from the crowd, but you've got to get it back. ... The second and third goals, to me, are much worse."

It stayed 3-1 through the second period and most of the third, until the Lightning picked up a power play in the final two minutes of the game when Krug tripped Cirelli as he chased after the puck with an empty net in front of him.

The Lightning made it 4-1 anyway when Steven Stamkos found the empty net on the power play with 42 seconds left.

NOTES: Former Red Sox pitcher Pedro Martinez was the honorary fan banner captain, waving a Bruins flag before the game. He was also showed several times on the scoreboard trying to get the fans fired up. ... Brad Marchand picked up a second-period slashing penalty and had to be forcibly steered to the penalty box by a linesman while he argued the call. ... The Lightning won for just the 10th time in 54 visits to TD Garden. Tampa Bay is 13-9 all-time in Game 3s and 7-5 in Game 3s on the road.