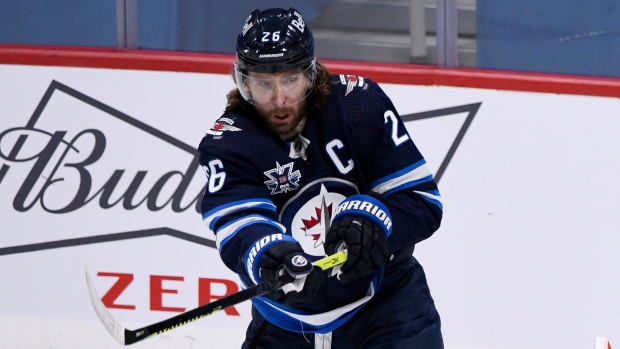 Paul Maurice is not putting up with any criticism directed at his captain Blake Wheeler.

The Winnipeg Jets head coach called out reporters in the media call before the team's optional skate on Wednesday, defending Wheeler from recent criticism that he has been on the ice for most of the 5-on-5 goals allowed by the Jets this season.

That included the first notable goal scored by Flames forward Matthew Tkachuk in Winnipeg's 3-2 win over Calgary on Tuesday.

"I’d just like you to be right about it…the goal you’re beaking about, he got put in a bad spot by a horse---- back check," Maurice explained to reporters on Wednesday.

"Since I got here, I’ve been in awe of Blake Wheeler how hard he works, how he runs the room and plays. He’s got 11 f------ points in 10 games - prorated out, it's 88 points. I’m not so much protecting Blake Wheeler, but the Winnipeg Jets…and how important it is when you get a guy like that…you're beaking my captain and I’m offended by it."

Wheeler played just 13:14 of ice-time in Tuesday's game, but was not dwelling on his own stat line.

"I don’t call the names and who’s up on the bench - that’s Paul’s job to play us," he told reporters on Wednesday. "We’ve got a lot of guys playing well right now and trying to play hockey games. The way guys are playing is a reflection of that.

"I’m never going to complain about my ice time. I’ve been treated very well here and think the lack of minutes is more of an exception than a rule, so we’ll see what happens."

Wheeler has three goals and 11 points in 10 games this season with a minus-9 rating.