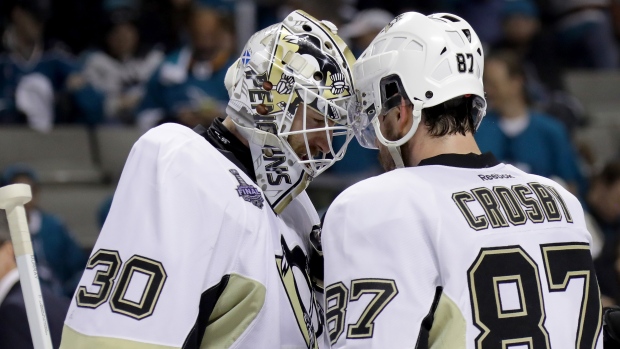 Over the past decade or so, the Western Conference has pretty much run roughshod over the Eastern Conference in the Stanley Cup final. That’s largely attributable to the dominance of two pseudo-dynasties in the Chicago Blackhawks and Los Angeles Kings.

In some ways, it would have been hard to imagine that the Pittsburgh Penguins could consistently blitz the San Jose Sharks out of the building, but that’s more or less what’s happened through the first four games of this year’s Stanley Cup final.

I think one of the biggest differences between Pittsburgh and Eastern Conference teams of yesteryear is that they just don’t skate fast, they play fast. That means sound structural play, lightning-quick puck movement and a forecheck that routinely puts the opposition into areas of discomfort.

What’s really interesting to me is that it seems this type of team speed is the kryptonite that other Western Conference teams searched haplessly for this postseason. The Sharks never looked uncomfortable against a pair of ultra-physical teams in the St. Louis Blues and Los Angeles Kings. The Nashville Predators strike me as a team that plays reasonably well with tempo, but I don’t think they had the requisite 23-man roster to seriously challenge the Sharks.

But this Penguins team is a different animal. Their ability to play fast and control the run of play means less time and opportunity for opposition talent to shine. Most importantly, they have a ton of talent in the depth of their lineup.

“You take the pass, make the read, try to make the play and then it’s not there when you’re trying to pull the trigger.”

If the Sharks have any roster or organizational flaw, it’s that they are a shade on the top-heavy side. At their best, they mash teams by way of their dominating top-six forwards. At their worst, their top two lines are held in check while the bottom six bleeds opportunities.

For this series, it’s been all about the latter for the Penguins. Our key performance metrics through four games are all considerably one-sided in favour of Pittsburgh, emphasizing that San Jose’s currently untenable position of being down 3-1 and facing elimination is more than a fair reality. 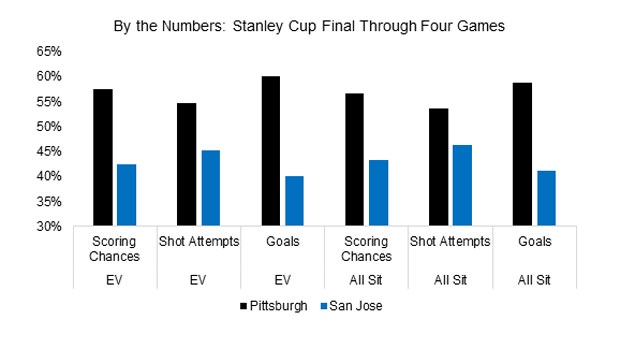 In the Joe Thornton era, you can probably count on one hand how many times the Sharks went through a stretch of games where they were considerably outplayed. It just hasn’t happened, and it’s the ultimate testament to how good he has been and how good the supplemental talent around him has been.

This series certainly isn’t over. It would be foolish to count out a Sharks team that has disposed of a number of good teams since mid-April. But with each passing game, it gets more and more difficult to see just how San Jose gets back into this series. They’ve been thoroughly outplayed, no matter which statistical measurement you rely on to capture performance.

With two of the next three games being played in Pittsburgh at CONSOL Energy Center, their chances of pulling off the three-game comeback seem grim.