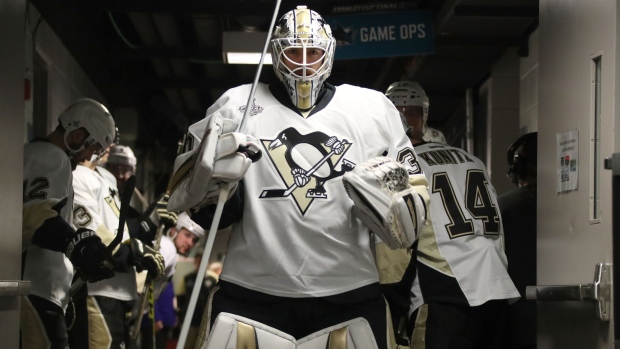 The Pittsburgh Penguins have extended goaltender Matt Murray through the 2019-20 season.

Murray signed a three-year contract with the Penguins of Thurday which holds an average annual value of $3.75 million, the team announced.

Murray has yet to play a game this season due to a hand injury suffered last month at the World Cup of Hockey. He joined the team for practice on Wednesday and is expected to play in the coming weeks. This is the final year of his entry-level contract.

Marc-Andre Fleury has started each of the Penguins first four games this season, posting a 2-1-1 record.

As TSN Senior Hockey reporter Frank Seravalli wrote Wednesday, the Penguins will only be able to protect one of the two goaltenders in June's Las Vegas expansion draft.

The 22-year-old Murray owns just 13 career regular-season starts, but got 21 starts in the playoffs last season as the Penguins won the Stanley Cup.

At the World Cup of Hockey, Murray posted a 1-1 record against Finland and Russia with a 3.16 goals against average and a .886 save percentage.

The Thunder Bay, ON native was selected by the Penguins in the third round (83rd overall) of the 2012 draft.