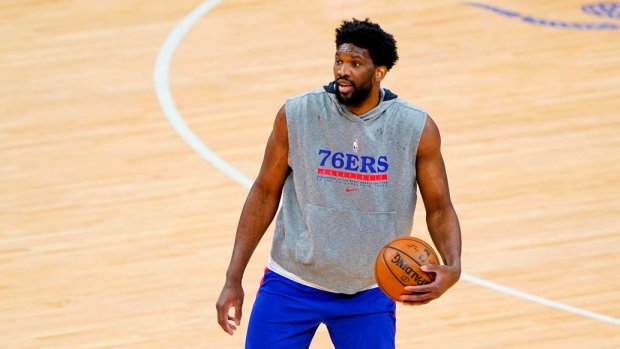 While Ben Simmons has dominated the off-court talk surrounding the Philadelphia 76ers in the early days of the new NBA season, their other superstar might not be available, either.

The team has listed centre Joel Embiid as questionable for Friday night's home opener against the Brooklyn Nets with soreness in his right knee.

The Sixers have listed Joel Embiid as questionable with right knee soreness for tomorrow’s game against the Nets, Ben Simmons as doubtful with “return to competition reconditioning” and Shake Milton and Grant Riller as out. Kyrie Irving is the only Net on the injury report.

The team will also be without the services of Shake Milton and Grant Riller, with Simmons remaining out for the foreseeable future.

A four-time All-Star, the 26-year-old Embiid was a finalist for NBA Most Valuable Player last season.

In Wednesday night's season-opening 117-97 win against the New Orleans Pelicans, Embiid had 22 points, six boards and five assists in 26 minutes.

Should Embiid be unavailable, Andre Drummond, who played 19 minutes against the Pels, will likely get the start in the middle.

Kyrie Irving is the only absence listed for the Nets.