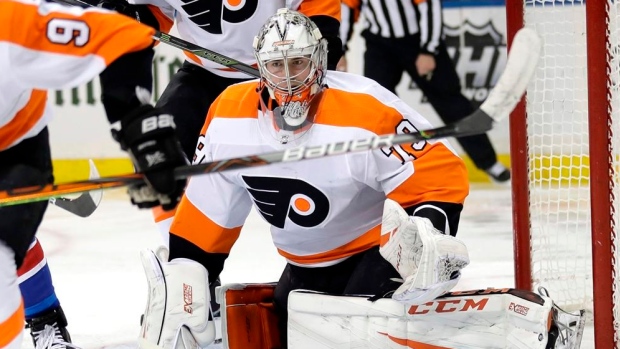 Hart made 23 saves and the surging Flyers extended their winning streak to a season-high six games with a 5-3 victory over the New York Rangers on Sunday.

Matt Niskanen, Sean Couturier and Travis Konecny each scored power-play goals. Michael Raffl scored short-handed and Derek Grant also tallied for the Flyers, who swept a home-and-home series against the Rangers after winning 5-2 on Friday night.

“We knew they were going to come out hard and try and respond here to the game on Friday," Hart said. "We just had to stick to our plan, stick to the way we play and just compete.”

The Flyers' run combined with the Penguins' six-game slide has moved Philadelphia into second place in the Metropolitan Division.

“Metro is a tough division," Flyers forward Kevin Hayes said. “And four points on the weekend against a division rival is huge.”

Henrik Lundqvist made his first start since Feb. 3 and made 21 saves for New York.

“It's pretty tough,” Lundqvist said. “I hadn't played in a long time. Some sloppy penalties cost us. And their power play is really good. They had so many odd-man rushes.”

Mika Zibanejad scored two power-play goals and Pavel Buchnevich also tallied on the man advantage for the Rangers. Zibanejad has a career-high 32 goals on the season.

The Rangers' offence got off to a slow start in their first full game since forward Chris Kreider broke his foot while blocking a shot in the first period of Friday's loss in Philadelphia. Kreider had just signed a seven-year contract reportedly worth $45 million on Monday, the day of the league's trade deadline.

The Flyers dominated the first period with two power-play goals and added a short-handed one late.

After the Rangers committed an early penalty, Travis Sanheim shot from the point. Nicolas Aubé-Kubel's rebound attempt hit the post and Niskanen scored into an open net for his eighth of the season at 1:52.

About 10 minutes later on the Flyers' next man advantage, Konecny sent a pass from the left circle across to Jakub Voracek. Lundqvist made the initial save, but the rebound came out to Couturier, who scored his 21st of the season at 11:19.

The Flyers closed out the period with a 3-0 lead when Raffl scored his seventh at 17:53. Raffl checked Ryan Strome to get the puck out of the Flyers zone. Grant took the loose puck and skated down the right side and slid a pass to Raffl, who beat Lundqvist with a backhand.

Grant made it 4-0 early in the second when he took a loose puck near centre ice, skated toward the net and also beat Lundqvist with a backhand for his 15th at 1:23.

The Rangers got on the board in the second period with Zibanejad's first power-play score. Artemi Panarin sent a nice centring pass to Zibanejad, who redirected it into the net at 12:34.

After the Flyers won the faceoff in the Rangers zone, Voracek sent a pass toward the net that was deflected in by Konecny for his 23rd of the season.

“Our power play was clicking incredibly well,” Flyers coach Alain Vigneault said. "I thought our PK at the beginning, we did a good job.

“Our power play lately has been a big weapon for us. It’s gotten big goals at big, big moments.”

The Rangers added two goals on the man advantage in the third period. First, Buchnevich redirected a pass while in front at 5:33. A little more than seven minutes later, Zibanejad scored again on another assist from Panarin to make it 5-3.

“We didn't get off to a good start,” Zibanejad said. "Then we give up one on our PP and we dig ourselves a hole.

“We have a lot of games left. Obviously it wasn't good enough in some areas. We have to tighten things up and get to playing the way we can.”

NOTES: Hayes and Vigneault were given a video tribute on the Madison Square Garden scoreboard during a stoppage in play midway through the first period. Both former Rangers are in their first seasons with Philadelphia. The was the Flyers' first visit to MSG this season. They'll return on April 1. ... Lundqvist's appearance was the 886th of his NHL career, tying Hall of Famer Tony Esposito for eighth all-time. ... Panarin extended his point streak to 13 games, which is a career high and the longest active point streak in the NHL. He is the first Ranger with 90 or more points in a season since Jaromir Jagr in 2006-07 (96).

Flyers: At Washington on Wednesday night.