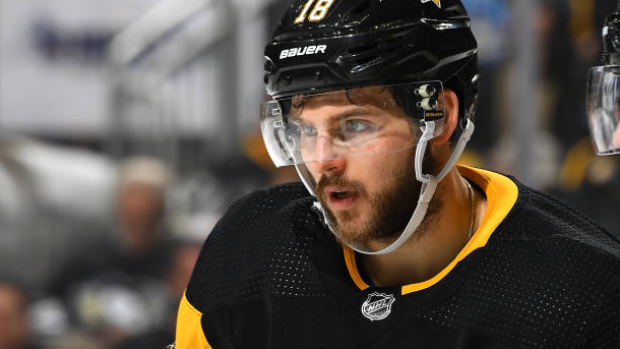 Alex Galchenyuk has slipped to the fourth line in his first season with the Pittsburgh Penguins and general manager Jim Rutherford told The Athletic that the off-season acquisition could find himself out of the lineup when the team gets healthy in the new year.

“The fact of the matter is, when we’re totally healthy he’s going to have to work very hard just to get in the top 12,” Rutherford said last week. “That’s just the way it is, because we have a lot of guys playing well. So, that’s the good news and the bad news.”

Galchenyuk, acquired from the Arizona Coyotes this past summer in a deal that saw Phil Kessel head the other way, has two goals and 10 points in 21 games this season. The 25-year-old has topped 10 minutes of ice time just once the team's past six games.

Rutherford, who called the 25-year-old "a very hard worker," noted that his production has been slowed by a lower-body injury suffered prior to the start of the regular season.

“He’s just got a lot more to give on the offensive side,” Rutherford said. “He got a late start because of an injury in camp. He was basically hurt all of training camp, so that didn’t help. He just hasn’t totally caught up yet.”

“He’s still averaging a half a point per game,” Rutherford added. “I’m not sure I expected a whole lot more than that.”

Galchenyuk has been unable to top the 20-goal mark since scoring 30 goals with the Montreal Canadiens in 2016-17. He scored 19 goals and posted 41 points in 72 games with the Coyotes last season.

The Penguins are currently without Sidney Crosby, Nick Bjugstad and Patric Hornqvist due to injuries, but all three are expected to return to the lineup in January.