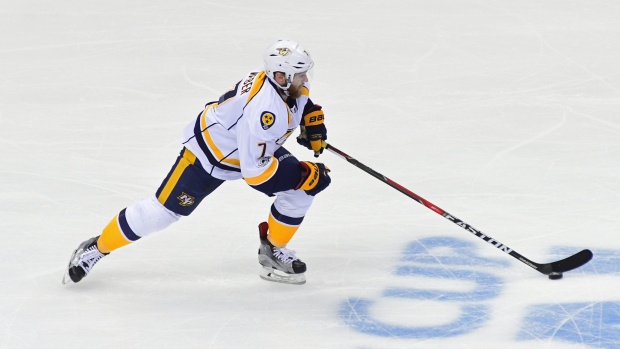 The Pittsburgh Penguins signed veteran defenceman Yannick Weber to a one-year, two-way contract worth $750,000 at the NHL level on Wednesday, placing him on waivers to complete the deal.

Weber, 32, scored one goal and posted three points in 41 games with the Nashville Predators last season. He was without a point in four games during the NHL's Return to Play.

Penguins signed Yannick Weber about an hour ago. One year, $750k. Has to go on waivers before he can be added on. https://t.co/dDjsIaGGoR

A third-round pick of the Montreal Canadiens in 2007, Weber has appeared in 497 career NHL games with the Canadiens, Vancouver Canucks and Nashville Predators.

The move comes after TSN Hockey Insider Darren Dreger reported last week that Penguins general manager Jim Rutherford was looking for help on the blueline with injuries piling up.

The Penguins are currently without Mike Matheson, Marcus Pettersson and Juuso Riikola due to injuries. Dreger reported last Thursday Rutherford was scouring the trade market, but would likely have to settle for a third-pairing blueliner.

"He's looking for a defenceman and part of that is through urgency and necessity and the fact he's already experienced injuries to the Pittsburgh Penguins blueline," Dreger said on Insider Trading. "But you're right, Jimmy Rutherford historically, traditionally, has always tried to get his shopping out of the way early. He's in the market for the best available defenceman but, in reality, he knows that he's going to have to settle for a third-pairing defenceman. He's definitely in the market looking for some help."

The Penguins dropped to 4-2-1 on the early season with their overtime loss to the Boston Bruins on Tuesday.