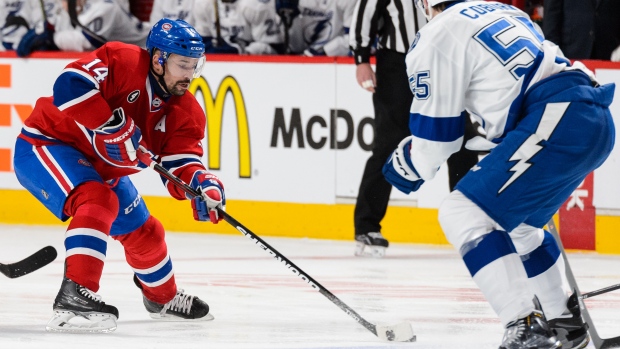 TORONTO - All is quiet on the contract front for Montreal Canadiens centre Tomas Plekanec.

Plekanec said his agent, Rick Curran, has not had any discussions with the Canadiens about an extension. His deal is up after this season.

The 32-year-old said it wasn't his call and that he liked playing in Montreal.

"Should I call and ask, 'Do you want me here?' I have a phone number. I think it's up to (general manager Marc Bergevin). If he wants me, I'm sure he'll call the agent and start talking."

The Canadiens are at a crossroads with young forward Alex Galchenyuk, who could get the opportunity to play centre this season. If Galchenyuk makes a successful transition from the wing, that development could make Plekanec expendable for a cap-strapped Montreal team.

"It's not up to me at this time," he said. "I've been in this situation before, I didn't know when I went to training camp. So it's not something unusual."