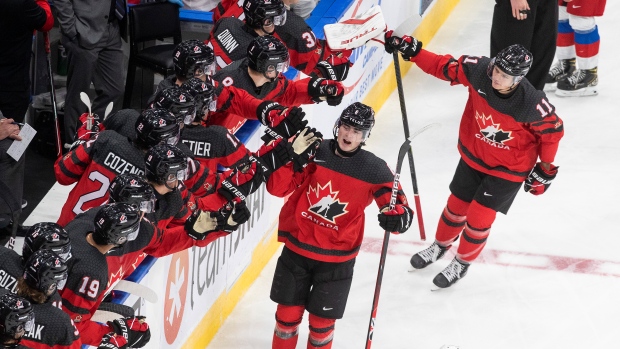 Despite being just 18-years-old, Team Canada defenceman Jamie Drysdale came into the 2021 World Junior Championship in Edmonton with a veteran poise.

As one of six returning players from the Canadian squad that won gold at the World Juniors in Ostrava, Czech Republic in 2020, Drysdale arrived in Edmonton for this year’s tournament with far different expectations.
In his first World Juniors, Drysdale played a smaller role as the lone draft-eligible player on the back end. He averaged 11:38 of ice time and recorded one goal and two assists in seven games.

This year, Drysdale was a top pairing defenceman for Canada, partnering up with 2019 Colorado Avalanche fourth-overall pick Bowen Byram to log heavy minutes and face the opposition’s best.

While this tournament ended with a silver medal for the Canadians instead of gold, Drysdale took a notable step forward with his play. His offensive numbers don’t pop out (two assists in seven games), but his defensive game was on display with his elite skating ability.

Drysdale and Montreal Canadiens first-rounder Kaiden Guhle are the only defencemen on the Canadian roster who are eligible to return for next year’s tournament.

Drysdale was drafted fourth overall by the Erie Otters at the 2018 OHL Draft. After a strong rookie season with seven goals and 40 points in 63 games and a spot on the OHL First All-Rookie Team, Drysdale produced at nearly a point-per-game pace in his sophomore OHL season with nine goals and 47 points in 49 games. He was named to the OHL First All-Star team as the COVID-19 pandemic wiped out the 2020 OHL playoffs and delayed the start of the 2020-21 season.

The Toronto native was selected sixth overall by the Anaheim Ducks in October’s NHL Draft, the second defenceman taken. He was named to Anaheim’s training camp roster for the upcoming NHL season that is set to start up on Jan. 13.

“He’s gifted offensively,” said former NHL defenceman Paul Ranger, who runs a hockey program that Drysdale attended in 2020. “Transition wise, moving pucks, breaking out pucks and his skating ability to add on top of that is seriously elite. His speed is exceptional.”

Drysdale, who is an ambassador for the Janes ALL IN initiative alongside Team Canada teammate Quinton Byfield, has proven to be a leader on the ice throughout his young career. He has worn the ‘C’ on multiple occasions with the national team, being named captain for Canada Black at the 2018 World Under-17 Hockey Challenge and the Under-18 Team at the 2019 Hlinka Gretzky Cup. He also was an alternate captain in 2019-20 with Erie.

“I’m really confident in my offensive game and the abilities that I have,” said Drysdale. “I want to be an impact player, I want to be able to make a difference.”