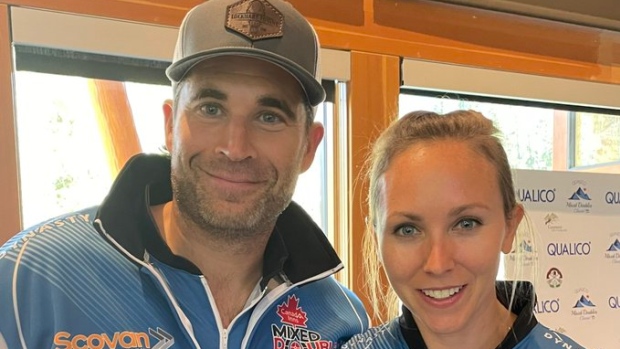 The duo of Rachel Homan and John Morris joined forces this weekend to capture the Qualico Mixed Doubles Classic in beautiful Banff, Alberta.

Homan and Morris - who have a combined six national titles between them in four-person curling - went a perfect 8-0 over the four-day event and defeated some very notable names in the process.

In the semifinals, the Homan and Morris tandem defeated the husband and wife pair of Brent Laing and Jennifer Jones, 8-2.

In the final, they would square off against Jocelyn Peterman and Brett Gallant, winners of two Canadian Mixed Doubles Championships. Homan and Morris scored three points in the third end and held on for the impressive 6-5 victory.

The pair, who both play on perennial contenders in traditional curling, have already qualified for the Canadian Olympic Mixed Doubles Trials, scheduled to take place at the end of the year in Portage la Prairie, Man. Both will also compete at the Tim Hortons Curling Trials with their four-person teams in Saskatoon from Nov. 20-28.

Morris competed at last year's Canadian Mixed Doubles Championship with Danielle Schmiemann as Homan was taking time away from the game after giving birth to her second child. The 42-year-old won the first ever mixed doubles Olympic gold medal with then-partner Kaitlyn Lawes four years ago in Pyeongchang, South Korea.

The field in Banff was comprised of 36 teams and had a total purse of $30,000. It also served as a Trials qualifier, but no unqualified Canadian duo were able to finish in the top four so that Trials spot was not awarded this weekend.

Madeleine Dupont and her Danish squad defeated the Olympic champs from Sweden, led by Anna Hasselborg, in the final of the Women's Masters Basel in Switzerland on Sunday.

Dupont, 34, scored a pair in the eighth and final end to pick up the 4-3 victory.

The Hvidore rink, rounded out by third Mathilde Halse, second Denis Dupont and lead My Larsen, defeated up and coming skip Isabella Wrana, also of Sweden in the semis, 8-6.

Hasselborg defeated Scotland's Eve Muirhead in the other semifinal match, 7-4.

Canada vs. USA in Winnipeg

On the women's side of the draw, Jamie Sinclair of the United States routed Kristy Watling of Winnipeg in the final, 10-4, capping a perfect 6-0 weekend for her Charlotte, North Carolina rink at the Assiniboine Memorial Curling Club.

Sherry Anderson picked up her second win of the season, capturing the Martensville bonspiel on the Saskatchewan Curling Tour.

The Saskatoon skip took on Regina's Michelle Englot in the final and earned the 6-4 victory, her fifth straight win at the event.

Anderson and her team of third Nancy Martin, second Chaelynn Kitz and lead Breanne Knapp will be in Liverpool, N.S., later this month to compete for one of the two remaining Olympic Trials spots.

Kody Hartung edged Daymond Barnath, 6-5, in the final of the Sutherland bonspiel, also on the SCT.

The Alberta Curling Series had another event this weekend at the Avonair Curling Club in Edmonton.

Krysta Hiker defeated Selena Sturmay in the women's final while SooHyuk Kim of South Korea got the better of Edmonton's Johnson Tao in the men's final.