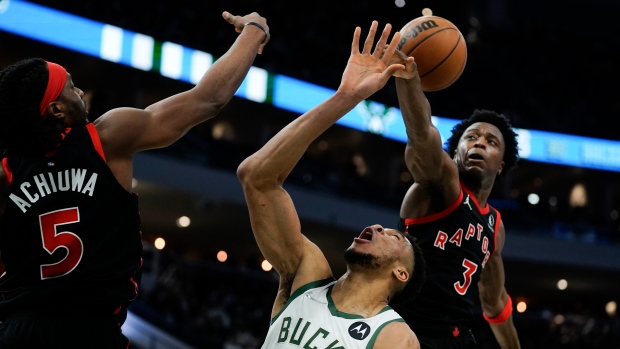 TORONTO – By this point last season, Kyle Lowry was starting to get the sense that his iconic nine-year run with Toronto was nearing its end.

The Raptors were hovering around .500 as they approached the halfway mark, but that’s when their fortunes turned. A mid-season COVID outbreak spoiled any chance of salvaging a lost campaign in Tampa, forcing them to look ahead to the future. For the first time in almost a decade, Lowry and the team he had become synonymous with were heading in opposite directions and an amicable split seemed inevitable.

When he signed with the Heat in free agency over the summer, hoping to chase another championship with a veteran group in Miami, he felt confident he was leaving his former club in good hands. After all, he had groomed his successors himself. Still, as they embraced the youth movement and began their transition to a new era, nobody knew exactly what to expect from this refurbished Raptors roster.

Now, with a 40-game sample size under their belt, albeit a noisy one, they can feel pretty good about their progress. Fred VanVleet has inherited Lowry’s role as the franchise’s heart and soul, and is playing all-star level basketball. The same could be said of Pascal Siakam, who’s back in pre-pandemic form since recovering from off-season shoulder surgery. OG Anunoby has taken another big step forward, and rookie sensation Scottie Barnes continues to make that nightmare 2020-21 season seem worth it.

Despite the anticipated growing pains and inconsistency, a multitude of injuries to key players and another organization-wide COVID outbreak, the Raptors appear to be hitting their stride. They’ve won seven of their last nine games and 12 of 18 overall, and at 21-19 they’re guaranteed to be above .500 when they reach the halfway point in Miami on Monday night. It would have been fitting, Game No. 41 coming against an old friend, however Lowry won't suit up; he's out due to personal reasons.

Although that first game against his former team will have to wait, perhaps until the Heat host Toronto again on January 29, the 35-year-old point guard has landed on his feet in Miami. Lowry's new club has also spent most of the first half playing undermanned. Jimmy Butler’s missed 18 games with a variety of ailments, and Bam Adebayo has been out for seven weeks following thumb surgery, though he’s expected to make his return against the Raptors. But at 27-16, they’ve got the third-best record in the Eastern Conference and, assuming good health, they should be well positioned to compete for a title in the spring.

These Raptors are not close to contending at that level, not as currently constructed, not yet anyway. However, they are ahead of schedule from a developmental standpoint. Their pre-season over/under for wins was a modest 36.5, yet they’re on pace for 43. How they’ve gotten here is a bit of a surprise, though.

Primarily made up of long and versatile forwards, this roster was designed to test the limits of position-less basketball. Whether it turned out to be a worthwhile experiment or not, the assumption was that they’d excel defensively but struggle to put points on the board. Strangely, for most of the season’s first half, they’ve been above average offensively, where they’re currently ranked 12th in the league, and below average on defence, where they rank 17th.

Those initial assumptions weren’t entirely misplaced. They don’t have much shooting depth behind VanVleet (who’s having a historic season from beyond the arc), Anunoby and Gary Trent Jr. When their jumpers aren’t falling, or without the injured Trent recently, scoring has been an issue. In the four games Trent has missed with a sore ankle, the Raptors are averaging 97.5 points. Excluding VanVleet and Anunoby, they’re shooting 12-for-56 (21 per cent) from three-point range over that stretch.

While they’re prone to lapses and miscues on the defensive end, they’ve also shown flashes of brilliance. When they’re locked in and suffocating opponents with all of their length and the ability to switch across positions on the perimeter, it’s not hard to see why they are so enamoured with this group’s upside.

Unfortunately, consistency has been hard to come by on either end of the floor. Such is life with a young team. Outside of Goran Dragic, who played five games before being excused from the team in November, the Raptors don’t have a single player over the age of 29. The inexperience has shown, on some nights more than others.

Complicating matters further is the fact that Nurse has only had his full rotation available once this season, and the team’s young core of VanVleet, Siakam, Anunoby and Barnes has only played nine games together. Anunoby went down with a hip injury shortly after Siakam made his season debut, then COVID knocked them all out of the lineup just as he was getting set to make his return, and Barnes has been dealing with nagging knee soreness ever since. Building chemistry or stringing together any kind of momentum hasn’t been easy.

It’s been maddening at times. Consider this past week as a prime example. After turning some heads with their recent six-game winning streak and a hard-fought loss to the first-place Phoenix Suns, the Raptors were embarrassed in Detroit on Friday, suffering their fifth straight defeat to their former head coach Dwane Casey and his lowly Pistons, who came into that game with a record of 9-31. So, naturally, with the team in Milwaukee the following night and facing Giannis Antetokounmpo and the reigning champion Bucks without three of their starters, the improbable happened.

On the backs of VanVleet, Anunoby and Siakam – who led the way with 30 points and recorded his second career triple-double – they pulled off an unlikely 103-96 victory. In the span of 26 hours, we got the full 2021-22 Raptors experience: their worst loss of the season, followed immediately by their most impressive win.

For better or for worse, you can say that about these Raptors. In spite of their youth and all the adversity they’ve faced, this is a resilient group. From the onset – when Washington ran them off the court in their Toronto homecoming, before they bounced back with a dominant showing in Boston a couple days later – they’ve shown character. Some of their best and most spirited efforts have come right after their worst performances.

It’s a familiar quality, one that Lowry embodied in his many years with the franchise and something he’s passed on to the next generation of Raptors leaders.

“We’re one of those teams that, I feel, can compete with anybody when we’re at our best, but when we’re not, we’re pretty average,” VanVleet said following the win in Milwaukee. “The challenge is to be consistent and raise the floor, and let your bad nights be better than what our bad nights have been. With a young team, I think the weather is a little bit more unpredictable. It’s been up and down. You can’t take this [win] to the bank by any means, but it definitely makes this plane ride to Miami a little more enjoyable.”