LeBrun: Avalanche showed they have the recipe to win the Stanley Cup

In the Tampa Bay Lightning’s quest for a three-peat and a place in hockey lore, perhaps their biggest challenge yet is this Colorado Avalanche team, loaded with talent and capable of playing at a pace that’s unrivaled in today’s National Hockey League.

Game 1 of the Stanley Cup Final was everything you could ask for, and then some. The Lightning clawed back – they always seem to claw back, don’t they? – from a multi-goal deficit to push the opener into the overtime frame. But just a minute into the extra period, Valeri Nichushkin and Andre Burakovsky teamed up for a dazzling game-winner, giving Colorado an early series lead.

After the game, Tampa Bay head coach Jon Cooper acknowledged the better team had won. Colorado outshot Tampa Bay 38-23 (attempts were 79-60 across all situations), and those shot totals were reflective of two components: the speed at which Colorado was playing with through the neutral zone, and the rate at which they were forcing defensive zone miscues from Lightning skaters.

Those components are frequently related. Dominate the transition game through speed and you will generate heaps of scoring chances off the rush. Play with enough speed pinned down in the offensive zone and you will invariably force poor decision making and loose passing. It seems like the majority of Colorado’s lineup, not just the top of it, can do that in spades.

Then there is Nathan MacKinnon.

If your team goes as your best players go, it’s not hard to understand why Colorado plays at such a blistering pace. This entire postseason – and long before it, quite frankly – MacKinnon has established himself as one of the league’s deadliest attackers, an assassin on the rush and a wondrous playmaker with the puck on his stick in the offensive zone.

He’s also an incredibly impatient player, and I say that in the most complimentary manner possible. Whereas other stars may patiently wait for crisper passing lanes and premier scoring windows, MacKinnon is going to fire the puck at you. Over, and over, and over again.

What did he do in Game 1? His usual silliness. MacKinnon had 13 shot attempts over the course of the game, which is about what we saw from the aggregate of Nikita Kucherov, Steven Stamkos, and Anthony Cirelli. This has been a common theme all postseason: 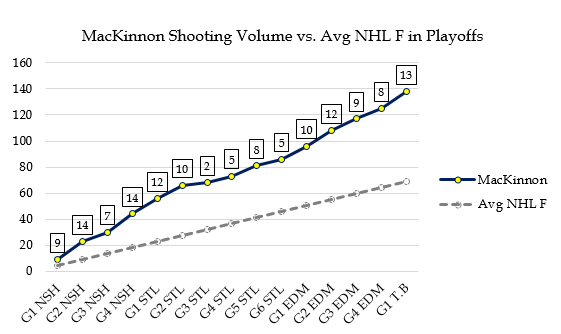 The easiest way to summarize this: For every shot your league-average NHL forward has generated this postseason, MacKinnon has two. That’s how far the gap is right now between what MacKinnon is generating and everyone else. Correspondingly, MacKinnon’s scoring chance numbers and real box score numbers (11 goals and eight assists in 15 games played) have exploded to the upside. 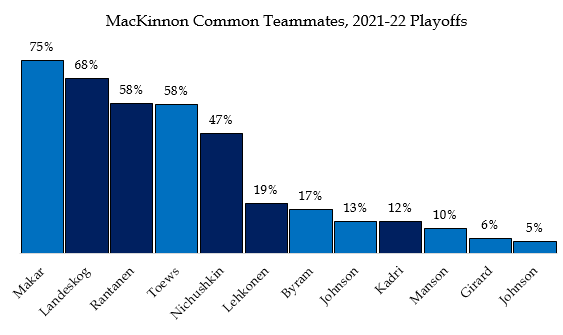 The luxury for Bednar right now is he doesn’t have to mix his lines much – when you’re losing games or the goals are hard to come by, the pressure to get the blender out mounts. But Colorado hasn’t dealt with either scenario much this postseason, allowing Bednar to dress and deploy his optimal skating groups. It’s had devastating effects on the opposition.

It’s a group that takes a lot of the playmaking burden off MacKinnon and gives him space to operate. Moreover, it allows him to not play with the puck if opposing coaches overweight their defensive strategy to contain MacKinnon on the rush.

Whatever the scenario, Nashville, St. Louis, Edmonton, and now Tampa Bay do not have an answer for this. If we look for a historical comparison to MacKinnon’s freakish ability to pressure goaltenders, there is really only one, and you may know him as arguably the greatest goal scorer in hockey history: 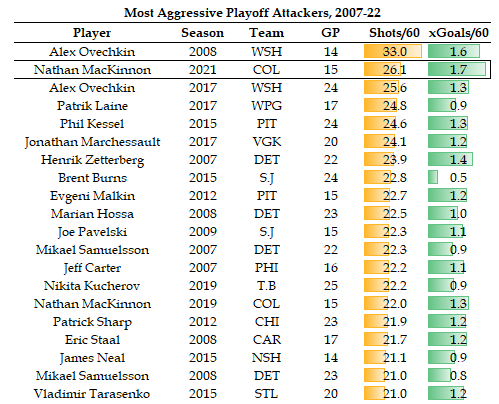 Tampa Bay’s star power will have its day this series – what Nikita Kucherov did to Devon Toews was a great example of Lightning personnel overwhelming Avalanche defensive players, something we have seen from time to time with this Colorado team.

But absent a goaltending meltdown, it’s hard to see how Cooper’s team can win this series without slowing the Avalanche and MacKinnon down. In Game 1, the Colorado offence spent all night attacking up the ice with time and space, and Lightning skaters were all too accommodating. They may be backstopped by the best goalie in the world, but that’s a tall order to ask for anyone, even Andrei Vasilevskiy.

These two teams are back at it on Saturday night. I’m most curious to see how Cooper changes defensive assignments and strategy to try to bog down Colorado’s speed game. We don’t have an answer to that question quite yet, but rest assured it’s at the top of Cooper’s to-do list as Tampa Bay prepares for Game 2.