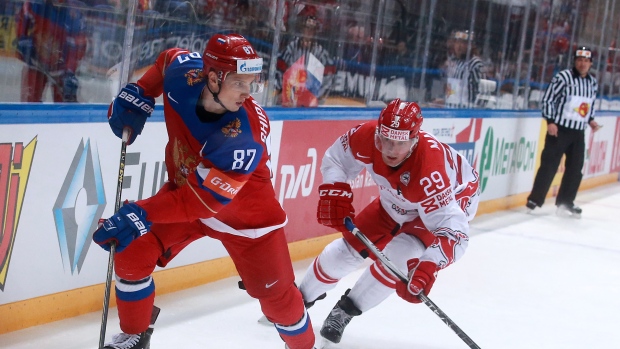 The Florida Panthers' busy offseason might not be over quite yet.

The Sun Sentinel's Harvey Fialkov reports the team is in talks with centre Vadim Shipachyov. A 29-year-old native of Cherepovets, Russia, Shipachyov has spent the last three seasons with SKA St. Petersburg of the Kontinental Hockey League.

A winner of the Gagarin Cup with SKA in 2015, Shipachyov appeared in 54 games last season, scoring 17 goals and adding 43 assists. He's made three apppearances for Russia internationally, including as a member of the team that captured the 2015 IIHF World Championships.

There remains confusion over whether or not Shipachyov has any time remaining on his SKA deal and if a buyout were to be required in order for him to sign an NHL deal. Reports in the spring had the Montreal Canadiens interested in his services.

If signed by the Panthers, Shipachyov would become the team's fifth free-agent signing this offseason after goaltender James Reimer, defenceman Jason Demers and forwards Jonathan Marchessault and Colton Sceviour. The team acquired and signed defenceman Keith Yandle from the Arizona Coyotes prior to last month's NHL Entry Draft and dealt defenceman Erik Gudbranson to the Vancouver Canucks in exchange for centre Jared McCann.