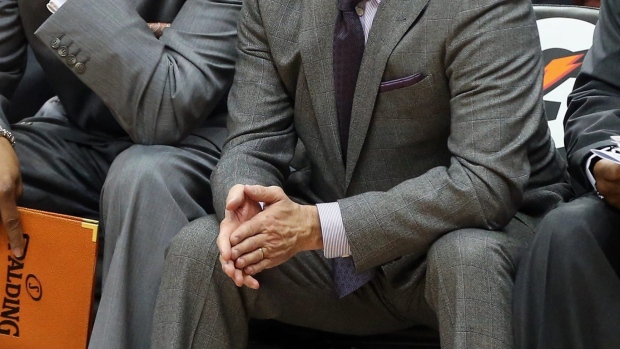 MINNEAPOLIS - Adreian Payne came to Minnesota on Monday as a seldom-used member of the powerful Atlanta Hawks, languishing on the bench for one of the league's best teams.

When the Hawks left town, Payne stayed behind and now finds himself with an entirely different future on a rebuilding Timberwolves team that should offer a lot more playing time.

The Timberwolves acquired Payne from the Hawks for a protected first-round draft pick on Tuesday, bringing Payne to a team that loved him when he was coming out in the draft and giving the Hawks some flexibility to make some more moves as they steamroll toward the playoffs.

"We are extremely excited to welcome Adreian to Minnesota," Timberwolves president of basketball operations and coach Flip Saunders said. "Adreian fits the mould of a young, athletic and talented player who we believe will fit in well with our young and talented core. We've liked him for a while and look forward to seeing him grow with us in a Wolves uniform."

The Timberwolves have a trade exception from the Kevin Love trade to Cleveland last summer, so they do not have to send a player back in return.

The first-round draft pick the Hawks are getting is lottery protected in 2017. If the Wolves are in the lottery from 2017-2020, it will become a second-round pick.

Moving Payne, a player who wasn't cracking the rotation, also opened up a roster spot for the Hawks, who are believed to be interested in free agent shooting guard Ray Allen as a possibility to bolster the scoring off the bench and also could use a big man to help them on the glass. The Hawks are among the league's worst rebounding teams despite their stellar record.

This was the first major move the Hawks have made since general manager Danny Ferry took an indefinite leave over racially charged comments and Budenholzer was given control of personnel matters, working with assistant general manager Wes Wilcox.

Budenholzer said the trade was made to ease a glut of big men and give the team some roster and salary cap flexibility going forward, though he insisted that no immediate move was in the works.

"We've gained a lot in this," Budenholzer said. "We've roster flexibility, financial flexibility and a first-round pick. We can better manage our young bigs to emerge and be successful."

Budenholzer said he's not concerned about the appearance that Atlanta has already given up on a first-round pick.

"The perception and the reaction of others outside of our group, that can't drive us," he said. "We very much appreciate our fans and respect and love the support getting we're getting from them. Hopefully, we've gained their trust."

Saunders is close with Michigan State coach Tom Izzo, Payne's college coach. The Timberwolves worked him out before the draft last June, but ultimately passed on him with the 13th pick in favour of UCLA guard Zach LaVine.

"I talked to Tom a lot," Saunders said. "We've had communication in the last week about three times just about things and concerns that maybe other people within our organization, our scouts, maybe had about him. I felt extremely comfortable with my conversations with Tom on what he thought Adreian could become in the right environment."

The Hawks took Payne with the 15th pick, but a surprising surge this season has offered them little time to let Payne develop in games. Payne has played a total of 19 minutes in three games this season while being buried behind All-Stars Al Horford and Paul Millsap and veterans Pero Antic, Elton Brand and Mike Scott in the Hawks frontcourt.

In Minnesota, he comes to a team that is 11-41 and in last place in the Western Conference. Injuries to Ricky Rubio, Kevin Martin and Nikola Pekovic derailed any hopes they had of being in the playoff mix, so they have turned their focus squarely to the future.

Veteran power forward Thaddeus Young could be on the trade block as well as the Wolves look to give Payne and Anthony Bennett, the No. 1 overall pick in 2013 who has struggled to find traction in his first two seasons with the Cavs and Wolves, more playing time at the position.

The Wolves also have Rubio back healthy at point guard and promising rookie Andrew Wiggins to build around as they move on from the Love era.