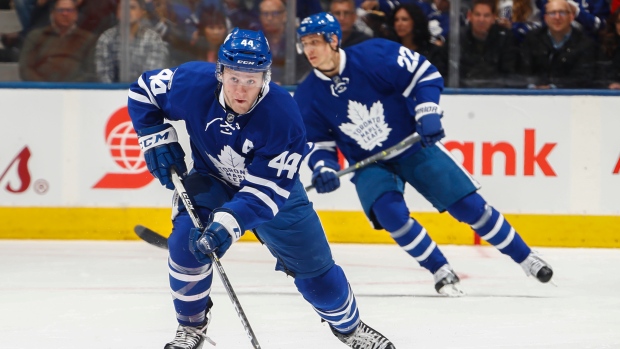 Maple Leafs defenceman Morgan Rielly has been selected by the Toronto chapter of the Professional Hockey Writers Association as the team’s nominee for the Bill Masterton Trophy.

The Masterton Trophy is awarded each season to the NHL player who best exemplifies qualities of perseverance, sportsmanship and dedication to hockey.

Perseverance has played a role for Rielly since before the Maple Leafs drafted him in 2012. After suffering a devastating ACL injury while playing for the Moose Jaw Warriors in November 2011, Rielly spent the winter rehabbing hard enough to make it back for the Western Hockey League postseason.

The time he missed slightly pushed him down the draft rankings, allowing Toronto to pick him at No. 5, but the dedication and work ethic Rielly demonstrated in his recovery made the selection that much easier for the Maple Leafs.

“When we researched him that’s what kept coming up…this kid never viewed the injury as a setback – he viewed it as a challenge,” former general manager Brian Burke said post-draft. “He met that challenge with legendary workouts he did to rehab. The way he attacked [his] recovery was impressive.”

Rielly didn’t miss a single game due to injury in his first three NHL seasons, while ascending the depth chart to become a top-pairing defenceman under Mike Babcock. His injury luck finally ran out this year when Buffalo Sabres forward William Carrier tripped him into the boards on Jan. 17 and Rielly suffered a high-ankle sprain. Despite being in obvious pain, the blueliner tried to return to that game before being pulled for good.

The recovery time for a ligament damaged in a high-ankle sprain is four to six weeks; Rielly was back in two, missing just six games. He clearly wasn’t 100 per cent, but Rielly was determined to stay in the lineup for a team with precarious defensive depth.

When his play was subpar in the following weeks – minus-12 in the month of February with five points in 14 games – he never used his ankle as an excuse, and kept grinding against opponent’s top lines. By mid-March he looked like his old self, putting up five points at plus-4 in his last 10 games.

Rielly is third in points among Toronto defencemen this season (six goals, 21 assists in 68 games) and is closing in on his second consecutive 30-point campaign. Rielly averages the second-most ice time (22:15 per game) on the team while also carrying the second-worst plus-minus (minus-19), indicative of facing those top matchups primarily with rookie partner Nikita Zaitsev.

Babcock named Rielly an alternate captain in October at just 22 years old, making him one of the youngest players to wear the ‘A’ in the league. Rielly is most often described by his teammates as someone who leads by example with his focused approach to getting better each day. In what is arguably hockey's most demanding media market, Rielly is unfailingly generous with his time and extremely cooperative with reporters.

The Masterton Trophy winner will be announced at the NHL Awards in June.