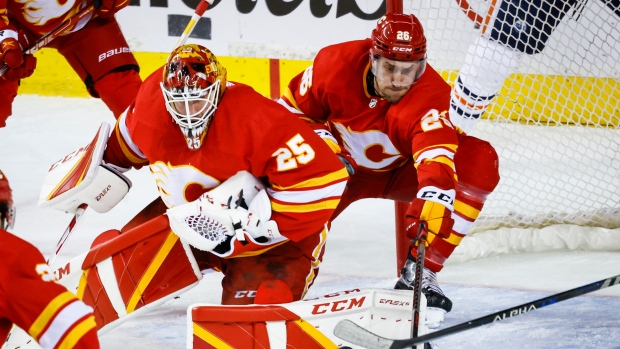 As the Calgary Flames head north to Edmonton for Game 3 of their series against the Oilers, Darryl Sutter’s group is focused on staying out of the penalty box.

At their even-strength best, the Flames can dominate teams for shifts or even periods at a time. They led the league in 5-on-5 goal differential and there have been glimpses of that in the postseason, however they haven’t spent as much time at 5-on-5 as they would like.

So far, the Flames have played the second-most minutes of any playoff team on the penalty kill, while their 5-on-5 time is among the lowest. During the Dallas series, Sutter spoke to the officiating supervisor about the amount of coincidental penalties and 4-on-4 play.

After Game 2 versus the Oilers, the Flames' head coach had a simple response when what the key was to staying out of the box.

Darryl Sutter on the #flames staying out of the box. 😂 pic.twitter.com/nQSkERrmKn

On Saturday, Sutter expanded on what he feels are the four most important components of a playoff series: goaltending, special teams, injuries, and officiating.

“They’ve had 22.5 minutes of either 4-on-5 us or 4-on-4, which is not in our favour,” Sutter said. "You will not win the series if you do that. That’s 22.5 over six periods. That’s definitely playing into [the favour of] two or three players on their team.”

“We have to stay out of the penalty box,” said Flames forward Rasmus Andersson. “We took what, six yesterday? That’s at least five too many against this team. They have a lot of skill up front.”

Flames goalie Jacob Markstrom outdueled the Stars' Jake Oettinger in Round 1. While his numbers have dipped in Round 2 (11 goals allowed through two games, equalling his total for the entire Dallas series), the coach is not pinning the Flames’ defensive deficiencies on one player.

“I’m not pinning it on anybody,” Sutter said. “That’s not fair at all. The difference between [Game] One and [Game] Two is chances for and against, and break it down by quality.”

“We can’t dwell on things,” Markstrom said. “It’s been too many goals against. We’ve got to be better and have a chance tomorrow.”

“We didn’t to him any justice yesterday,” Andersson said.

The two goals in the third period by the Oilers in particular were results of lapses by the Flames. On Zach Hyman's game winner, Andersson mishandled the puck at the point on the power play, allowing Hyman to skate in alone on a breakaway to put the Oilers ahead. Less than three minutes later, no Flames picked up Leon Draisaitl behind the defence, and he was also able to skate in uncontested.

“The past two games here we haven’t really been playing (our type of hockey),” forward Tyler Toffoli said. “It’s been getting away from us.”

“We paid the price required to win a game in the second round,” Oilers head coach Jay Woodcroft said after the game. “We found a way in a tough environment to score seven goals. Two of them got called back, of course, but we found a way to score seven.”

When asked about adjustments his group made, Woodcroft didn’t want to “get into trade secrets” but mentioned how the team carried the puck up the ice that enabled those high quality scoring chances.

“There were things we wanted to do on our breakouts that we were able to accomplish,” he said. “We talked about the ratio of breakouts to D zone coverage. I thought it was way more the number of where we wanted it to be. When we did defend, I thought we were harder. We didn’t spend as much time in our own zone and that’s a credit to the work ethic of everyone on the ice.”

Woodcroft also went out of his way to praise Mike Smith, who was pulled less than seven minutes into Game 1 after allowing three goals on 10 shots.

“Can’t say enough about him. He doesn’t have an A on his jersey but he’s one of our leaders,” said Woodcroft.

“Smitty’s just a battler, you know,” added Connor McDavid, who had two points in another heroic effort. "He played great, made some big saves, and makes a big play there to Leo to spring him for his goal. So, a little bit everything from him tonight.”

On Saturday, Markstrom told reporters he had to be better.

“Everyone, myself included, needs to take another step and get back to our game to be successful,” he said.

“He certainly responded last night [after Game 2] and that’s the sign not of a guy who’s questioning how he’s playing,” Sutter said. “That’s a guy that wants to be the very best if he’s saying that. That’s a great attribute to have.”