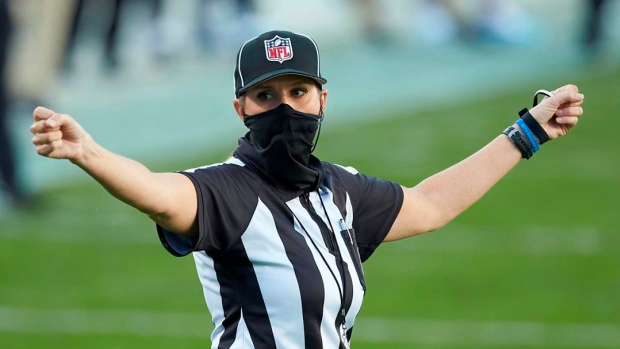 NEW YORK — Sarah Thomas will cap her sixth NFL season by becoming the first female to officiate the Super Bowl in NFL history.

Thomas, a down judge, is part of the officiating crew announced Tuesday by the NFL.

“Sarah Thomas has made history again as the first female Super Bowl official,” said Troy Vincent, Sr., the NFL's executive vice resident of football operations. "Her elite performance and commitment to excellence has earned her the right to officiate the Super Bowl. Congratulations to Sarah on this well-deserved honour.”

Referee Carl Cheffers will lead the seven-person crew of on-field game officials for the Super Bowl on Feb. 7 at Raymond James Stadium in Tampa, Florida. Cheffers has been a game official for 21 seasons in the NFL and was promoted to referee in 2008. He has worked 17 playoff games, including the Super Bowl in 2017.

This will be the first Super Bowl for Coleman as well as Thomas and second for Cheffers, Bryan, Baynes, Hall and Paganelli.

"Their body of work over the course of a 17-game season has earned them the honour of officiating the biggest game on the world’s biggest stage,” Vincent said. “They are the best of the best.”