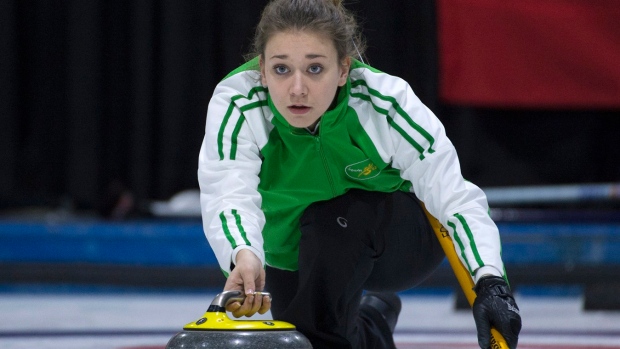 PRINCE GEORGE, B.C. - Shannon England crisscrossed the globe during his wife's sporting career, and it would suit him just fine to do the same with another family member.

The husband of late curling legend Sandra Schmirler, England is at the Canada Winter Games watching his 17-year-old daughter Sara compete for Saskatchewan.

"I guess I'm destined to watch the women in my life curl," England said this week. "It is a lot of fun."

Schmirler won three national titles, three world championships and the first women's Olympic gold medal in curling before she died in March 2000 from cancer at age 36.

Sara England has decided not to talk to the media in Prince George, but her father sat down to chat about his daughter's progression and some of the attention she's been getting in recent weeks.

"I think the fact that everybody still thinks so highly of Sandra ... they want that connection to her," he said. "With Sara coming up and curling now there's that connection back to Sandra. I'm not really surprised.

"Sandra's legacy to this game is that when she and her team won the Olympics in '98, they really took curling forward. These ladies' teams have come so far."

Shannon England, who also curls competitively, added that Sara didn't get into the sport right away as a child.

"Probably a little bit about her mom," he said. "I was careful to introduce her to the game, but I didn't want to push her. It had to evolve itself."

Sara plays third for her Regina-based rink with skip Kaitlyn Jones, second Shantel Hutton and lead Rayann Zerr. The foursome defeated Alberta 6-5 in Friday afternoon's quarter-finals before falling 8-3 to Ontario in the semis later that evening.

Shannon England said there are a lot of similarities between daughter and mother, including style of play, passion and drive.

Like many children of successful athletes, it's inevitable that Sara, who was just a toddler when Schmirler died, will be compared to her famous mother regardless of what she accomplishes.

It's something England has discussed with his daughter.

"It's pretty unfair to say there's expectations for you to win three Canadians, three worlds and Olympic gold and compare yourself to your mom. She told me: 'If I did that I'd never curl,'" he said. "You've just got to do it for the love of the game. People will judge and people will compare, but that's just natural. You do it for yourself."

He added that despite the increased exposure that comes with competing on the national stage, curling also remains a family affair.

"I can still get the better of her. Her mother always beat me," he said with a smile. "It's kind of fun now, but I don't think it will last much longer. I probably won't have a chance in a year or two."