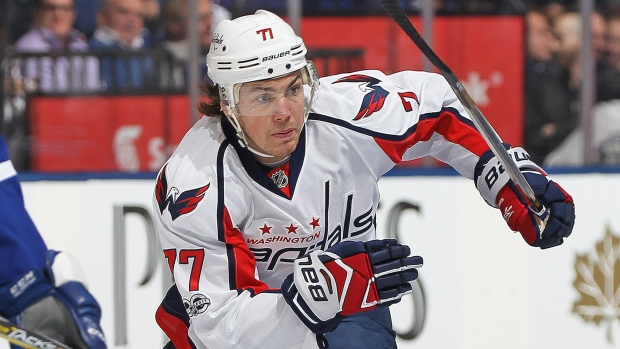 This week, NBC Sports’ NBA Insider Tom Haberstroh wrote a fascinating piece on Golden State Warriors swingman Andre Iguodala and why he is worthy of enshrinement in the Basketball Hall of Fame.

On the surface, Iguodala is a hard sell for the Hall of Fame. He has one All-Star Game appearance and has never been named to an All-NBA team. But Haberstroh points out that more modern metrics suggest Iguodala has been an emphatic difference maker over the course of his career.

As one example, Haberstroh points out that Iguodala’s plus-minus – which is a much more valuable measure in the NBA than it is in the NHL due to scoring frequency – is the second highest number recorded in the NBA Finals since 1997 (he is surrounded on the list by names like Manu Ginobili, Tim Duncan, Draymond Green and Stephen Curry.)

This led me to wonder about similarly situated players in the NHL. Unfortunately, a direct comparison to the league’s year-end two All-Star teams doesn't work all that well. (The NBA sends 3.1 per cent of their players to an All-NBA team, nearly double that of the NHL. Positional requirements for voting are also more rigid in the NHL.) We do have the Hart Trophy though, awarded annually to the player judged most valuable to his team. About 25 players receive one or more votes for the award each year, so we have considerably more sampling data on the players the Professional Hockey Writers’ Association has valued over time.

We can measure the historical votes against some player performance measure. I am going to leverage a goals above replacement model because of its ability to encompass a player’s offensive and defensive impact better than any other singular metric, but similar exercises could be conducted with a variety of other measures. (I think the conclusions would generally be similar.)

First, some rules. The data we are sampling on is over a 10-year period – from 2008-09 to 2017-18. We know that usage is an important data point when determining Hall of Fame candidacy, so we will only look at players with at least 10,000 minutes of total ice time.

From there, we can look at each player’s goals above replacement value on a raw basis and per 60 minute basis against all of his peers. Lastly, we will only consider players who have received 10 or fewer Hart Trophy votes. (Note: this means names like Ryan Suter, Shea Weber, Patrick Marleau, and P.K. Subban types are omitted from consideration.)

Applying all of those rules, we are left with the following ‘No-Stats Hall of Famer’ candidates. Select at your own discretion, but I think this is an interesting mix of players who probably have some argument to make it to the Hall of Fame, and players who have just been underrated for a very long time: 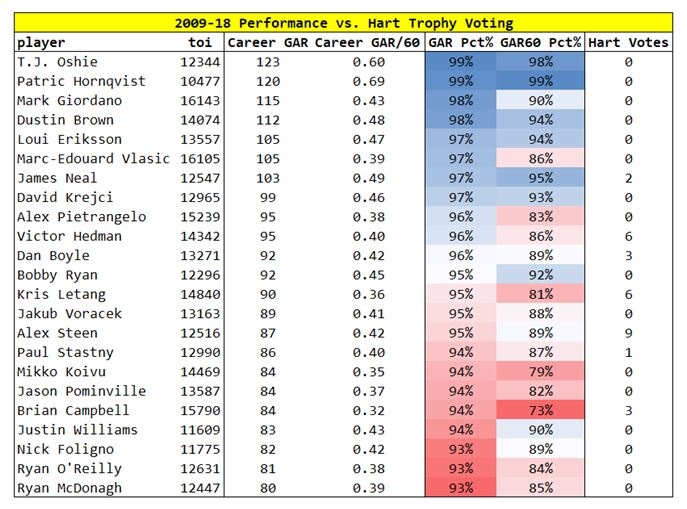 The encouraging part about this list is it is broadly inclusive of players who have (a) had lengthy and productive careers; and (b) are regularly excluded from the significant individual award consideration, either because of their position, their team’s performance over the years or the performance of potentially superior teammates over the years.

The big three names here – Washington’s T.J. Oshie, Pittsburgh’s Patric Hornqvist, and Calgary’s Mark Giordano – are interesting for different reasons. Oshie has a Stanley Cup and some lofty counting numbers that generally correlate with ‘star’ reputation, but hasn’t accumulated anything of note in terms of individual hardware. Beyond that, superstar players on his teams have generally overshadowed Oshie – the most obvious examples include Alexander Ovechkin and Nicklas Backstrom in Washington, but Paul Stastny and an in-his-prime David Backes in St. Louis also cloaked Oshie’s performance in the early years of his career.

It might be Patric Hornqvist, though, who looks like the best Iguodala comparison. Despite being a consistent 20-plus goal scorer and two-time Stanley Cup winner over his 11-year career, Hornqvist has rarely earned proper praise. From 2008 to 2018 at even strength, Hornqvist has been 94 goals better than the opponent while on the ice. That puts him right in between names like Corey Perry and Steven Stamkos near the top of the on-ice goal differential leaderboard. The goal differentials have been largely driven from his defensive touch, which is always tougher to properly value: Hornqvist’s teams have only conceded about two goals per 60 minutes at even strength while on the ice, which puts him 10th best amongst qualified forwards – decimal points behind Patrice Bergeron and ahead of Anze Kopitar.

Mark Giordano has earned more praise and fanfare of late – he finished as a Norris Trophy finalist in 2018-19, though it’s worth noting that this was Giordano’s first nod for consideration as the league’s best defender. On top of that, Giordano has never won a Stanley Cup and was left off of both of Team Canada’s gold-medal teams at the 2010 and 2014 Winter Olympics. But Giordano has always been an advanced stats darling, in large part because of his massively favourable impact to team shot differentials, scoring chance differentials and goal differentials over the course of his career. Giordano excels in all areas of the ice and does the little things as well as anyone in the league. Those quiet impacts have made him arguably Calgary’s most valuable player since entering the league as a regular in 2006-07.

Those three names (along with Justin Williams further down the board) jump off the page to me. How about you?