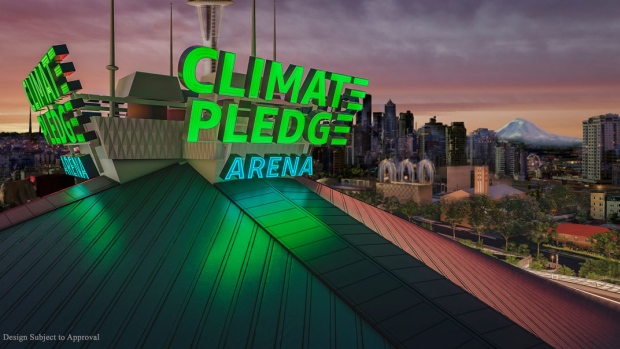 Seattle's new downtown arena that will house both its expansion NHL team and the WNBA's Seattle Storm will be called Climate Pledge Arena after Amazon purchased its naming rights.

The arena is scheduled to open in the fall of 2021.

“We’ve secured naming rights to the historic arena previously known as KeyArena," Amazon CEO Jeff Bezos said in a statement. " Instead of naming it after Amazon, we’re calling it Climate Pledge Arena as a regular reminder of the importance of fighting climate change. We look forward to working together with Oak View Group, a new Climate Pledge signatory, and NHL Seattle to inspire global climate action.”

The name comes from Amazon's "Climate Pledge" announced last year that aims to see the company become net carbon neutral by 2040. Amazon says the new arena will be first net carbon neutral facility of its kind in the world, generating zero waste and being powered by 100 per-cent renewable electricity. The company also says that its ice will be made with reclaimed rainwater.

The Seattle expansion franchise is set to begin play during the 2021-2022 season in the Western Conference's Pacific Division.