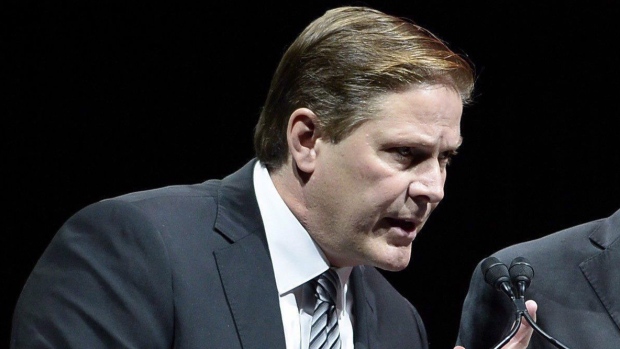 Lee is accused of making lewd comments and rubbing the shoulders of a 19-year-old male shuttle driver in May, when Buffalo was hosting the NHL pre-draft scouting combine. He has been suspended by the Senators.

Cambria said he will argue to have the harassment charges dismissed on July 20, when Lee is next scheduled to appear in Buffalo city court.

"There's no violation of the law according to the claims being made," Cambria said. "We think they're inappropriate, unsubstantiated and baseless."

A spokeswoman for the Erie County district attorney's office previously said prosecutors will oppose the motion to dismiss.

Lee was arrested May 31 after prosecutors say he continued placing his hands on the driver's shoulders even after being told to stop. He also allegedly made a reference to his genitalia.

Prosecutors filed a second charge of harassment, which fell under a separate subsection of the legal code outlining the violation. It defines harassment as someone who "repeatedly commits acts which alarm or seriously annoy" another person and "serve no legitimate purpose."

That's different from the initial charge, which defines harassment as someone striking or making physical contact with another person.

Cambria said he was unaware of any video footage of what happened, but that he will consider filing a motion to have prosecutors turn over their evidence.

Cambria raised concern over whether Lee is being treated differently by prosecutors because of his high-profile job and the media attention the case has received.

"I've never seen anybody from the district attorney's office have a press conference about a noncriminal violation," Cambria said. "Our hope is that this is handled for what it is, a low-level accusation, which my client vehemently denies."

District Attorney John Flynn made himself available to reporters at his office following Lee's initial arraignment on June 1. Flynn's availability had to be moved to a larger room because of the number of reporters present.

Cambria also questioned the motives of the 19-year-old driver, who has hired attorney Charles Desmond. Cambria said he's already been contacted by Desmond and informed of the possibility of the driver filing a civil suit against Lee and the Senators.

"That needs to be taken into consideration as to whether this is some sort of money grab," Cambria said. "I mean, this is a person who makes an allegation that his shoulder was rubbed and now is looking to be paid by the team."

Desmond did not immediately respond to a message from The Associated Press seeking comment.