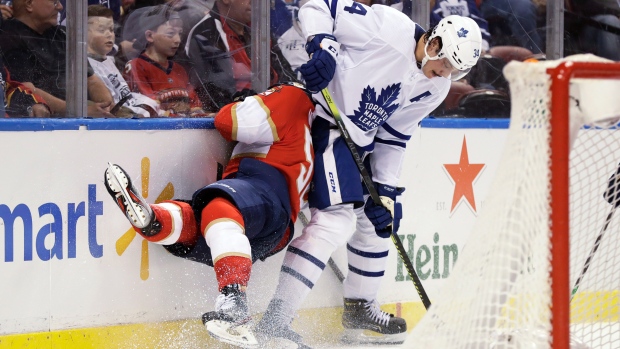 Toronto Maple Leafs president and alternate governor Brendan Shanahan spoke to the media for 10 minutes Thursday in Los Angeles. In the rare media availability, Shanahan spoke about why he thinks the team is making progress despite a run of inconsistent play, the Selke Trophy potential for Auston Matthews and how the organization is dealing with the coronavirus.

The following is an edited transcript.

On how the team has handled injury issues this season ...

"Adversity is something that every NHL team will go through, for all teams not just ours, and it’s something that you can either meet and grow from or you can use it as an excuse and I'd like to think our players are not using it as an excuse, certainly not in management or coaching. These are the peaks and valleys and certainly the adversity is times when you have to grow. It's difficult to become a good team in the NHL, but I think it's even more difficult to become an elite team, and ... to me one of the biggest separations between the elite teams and the good teams is consistency and that's something we are definitely, as a group, trying to learn and develop, just that ability to come out with that same peak effort. You're never going to do it all 82 games in a row, but certainly doing it more often than not and that's something our guys are learning and something I'm very confident that they'll continue to grow at."

Why are some of the losses so bad? Why is the gap between the best games and worst games so big?

"It's funny, I remember four or five years ago saying to somebody that we had an idea and a plan and a vision to try and make this, you know, an elite NHL team and that person had said to me, 'Well, that will be so nice, because once the team's a good team and once the team is competing for a Stanley Cup then it will be nice and peaceful and quiet,' and I said, 'It’s just the opposite.' Once you become a good team and, again, we're trying to develop into an elite team, and we see it on some nights against certain opponents, we know that it's there, but this is what it's like. This is what it's like to be a team that's trying to compete for a Stanley Cup. It's quieter and more peaceful when you're going the other way and when you're trying to rebuild from scratch. But if we are lucky enough to be the kind of team that can compete and win Stanley Cups it will not be peaceful, it'll be loud and noisy, because the decisions are worth more and the small decisions, the small tweaks will have a bigger impact on a bigger stage and that’s just the way it is."

Why is it hard to go from good to great?

"Again, I think the biggest thing is that professionalism. We all like to look back and think certain players, even the best players who ever played the game, never had bad games, it's just not true, but their ability and the ability of great teams to have fewer bad games, also a sense of of occasion of knowing when a game is a must-win game. I think that that's just something that comes in time and experience and I think that playing in Toronto can speed that up, because we are so sort of on it and our fans are so passionate, but I see that as an advantage and not a disadvantage that the expectations are high in that regard. I have all the confidence in the world that the players that we have in this group and our management will make adjustments where we need to and we'll make additions where we need to. We're seeing a lot of the same stuff that our fans are seeing, but I have all the confidence in the world that we're going to get there and we're going to continue to power through this."

What have you seen this year that has given you confidence that this group can get there?

"Well, it's not just this year. I think that it's some of the things I've seen just in the growth and maturation of some of our young, core players, but I also love some of the additions. I don't think you can underestimate (that). You know, I think sometimes will take a snapshot of our team and think this is exactly who we are and what we want to be and what we intend to be. But when you add a guy like Kyle Clifford, I think what that intangible has brought to the rest of our club (is important), I think he's had a positive impact on the game of (Kasperi Kapanen) and I think having more Stanley Cup champions and more leaders, getting (Jake) Muzzin re-upped, (is important). And sometimes, with time, players grow from experience and get that scar tissue. I just think that, you know, obviously we've had some real adverse moments and real highs and lows and there are certain moments where other people or even you, you might even question yourself sometimes and say, 'How are we going to react in our next game?' And, for me, it's always, 'What do we do in our next game?' And there have been some occasions where those questions have been valid and been really out there and our guys have really stepped up so it's just a matter of them developing that professionalism and consistency, which is not unlike a whole lot of other guys who are 22 and 23. We were all there at one point. We spoke differently at 22 and 23 than we did at 27 and 28 and that's just a fact. We want to get them there as a quick as possible, like our fans, and they want to get there as quick as possible, too."

What do you think of the job Sheldon Keefe has done?

“I think he's been great. Our record under Sheldon's been very good (26-14-4). It's not easy for any coach to come in in the middle of the season. You're inheriting a group. Certainly, he knew the group, he's been in the organization for a long time, but what I said on that day he was introduced is still how I feel today. It's great to have an entire management group from myself to Kyle (Dubas) to Sheldon that are aligned and, like I said, it's not to say you can take a snapshot picture of our team on any one day and say, 'This is it, we’re done, we've finished adding to our group,' it’s always going to take some evolving and some adjustments and tweaks here and there, but I really like the job Sheldon has done."

The expectation at the start of the year was this team could contend for a Stanley Cup. Have you seen enough, that you think this is still a contending team this season?

"I just see adversity differently. I remember years and years ago when I was playing for (then Hartford general manager) Jim Rutherford and he came into our dressing room with about 12 games to go and sort of took the pressure off of us and said that, 'It didn't all ride on this year,' and at the time, I loved Jim Rutherford, but I hated that message as a player. I wanted to have that pressure that we had to win this year so I'll never take that pressure off our guys to sort of say like, 'Look, this is a long-term thing.' It really is about now, but the truth of the matter is right, this is about how we develop and how we grow. But I don't ever want to take the pressure off the guys. They want that pressure and the expectations about now and then, management, it's our job to make judgements and make assessments about now and about the future as well."

What's impressed you most about the season Matthews is having?

"I always felt when he first came up that he (was) one of those rare players who has the ability to lead a league in scoring and also be its best defensive player. I mean, there are very few guys that do that in hockey, I can remember (Sergei) Federov, in basketball Michael Jordan, and that’s putting him in some elite company but, and I don't want to put that on him today, but he is (that) kind of guy ... I think Auston is dynamic and explosive offensively, but he also has the ability with his size and his strength and his awareness and his commitment to be also a Selke Trophy winner."

What would a 50-goal season mean to the organization?

"We're all about team success and we know why we're here and we're not here for any of those individual accolades but, that being said, it's still exciting for the fans and it's exciting for us and it's probably exciting for Rick Vaive so you can't ignore that stuff, you can't ignore the individual achievements of players, but we understand and they understand, how can you not when you’re living and playing in Toronto, that it's all about the team success."

How big of an issue is the coronavirus for the team right now?

"It's on our plate, certainly, like a lot of organizations, the CDC (Centers for Disease Control) and the WHO (World Health Organization) are working closely together, our own physicians are closely in contact with them to see how this evolves day to day. So, it's not something that anybody, and if you turn on any of the news stations on any given day, it's not something that anybody has completely figured out yet, but we can lean on those professionals and not necessarily rumours or other ideas that are going on in social media or the press and if we lean on the CDC and the WHO I think they're going to give us the best, most accurate information so our players and our fans and our community are as safe as possible."