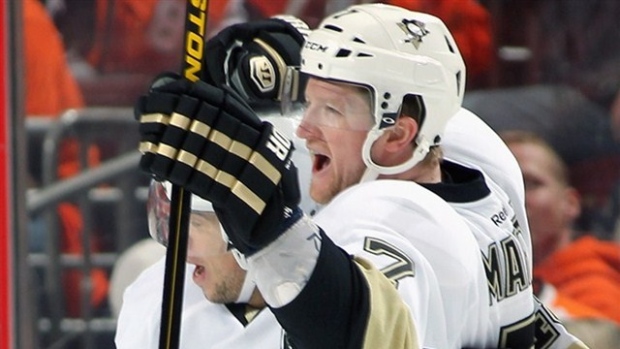 A day after acquiring Martin Jones to be their new starting goaltender, the San Jose Sharks have agreed to terms on a four-year, $19.4 million deal with defenceman Paul Martin.

The contract carries a cap hit of $4.85 million per season.

Martin spent the last five seasons with the Pittsburgh Penguins, including appearing in 74 games in 2014-15 where he produced three goals and 17 assists.

"We feel good we got these two pieces off our checklist," general manager Doug Wilson said. "Now it allows us to look at some other things and explore. But we don't feel like there's any rush. These two pieces needed to be addressed. They have been and we'll go forward from here."

Prior to playing with the Penguins Martin spent six seasons with the New Jersey Devils, the team that made him the 62nd overall pick in the second round of the 2000 NHL Entry Draft.

"For me I wanted the most important thing is to win," Martin said. "I haven't won a Cup yet. That was at the top of the list. Besides last year missing the playoffs, San Jose was one of the teams at the top of my list as far as being able to win. They've proven that they can win."