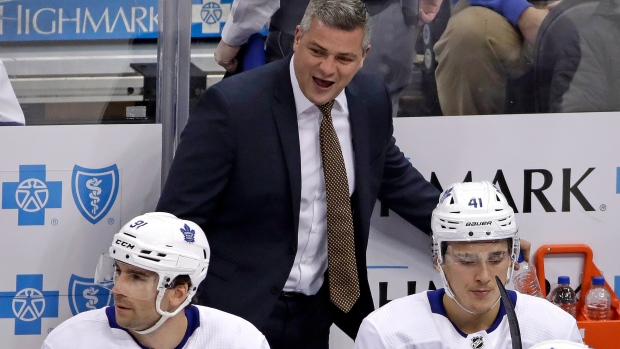 TSN Toronto Reporter Mark Masters reports on the Maple Leafs, who practised at Northwell Health Ice Center at Eisenhower Park in New York on Friday ahead of Saturday’s game against the Islanders.

After watching the Leafs blow a 3-1 lead in a 6-3 loss to the Rangers on Wednesday night, Sheldon Keefe didn't hold back. He called out the team for playing "soft" and "purposeless."

Those comments dominated discussion in Toronto on Thursday as the Leafs enjoyed a day off in New York. So, before taking any questions at his media session on Friday, Keefe felt compelled to clarify his critique.

"We've competed at a really high level all season and we have been a team that's been difficult to play against," Keefe said. "When we're at our best we're a team that has played with the best in the league. [We've] established ourselves among the best in the league and that's been through a foundation of competitiveness and physicality and our structure. We continue to work at the consistency piece. That's where we need to continue to work to get better."

The Leafs have been among the best teams in the National Hockey League since late October, winning 22 of their last 30 games.

"My belief in this team hasn't changed in any way," Keefe stressed. "It's just the fact our standard slipped the other night when playing with the lead in the second and third periods. We can't win by playing that way."

The word "soft" is a loaded one in the hockey world. What exactly did Keefe mean?

"When we're at our best, like we were at the start of the game and through long stretches of this season, we're hard to play against," Keefe explained. "You can't get to our net. You don't have the puck very often. There's puck pressure. We're on top of you quickly. We get to pucks first. All those kinds of things make make us a hard team to play against. We didn't do that when we had the lead in the second and the third period. That is really what I am referring to. We made it easy on the opposition."

Keefe is expecting a response on Saturday against the Islanders.

"I know what we're capable of as a team," Keefe said. "We've earned the right to have high expectations and high standards around here. I'll continue to push and challenge our team."

Keefe did not address the team after the game on Wednesday, but hit on similar themes with the players during the second intermission.

"I don't say things to the media or in the media, especially if it's to that effect, that I haven't already mentioned or spoken in that tone to the team. So, they're not caught by surprise in that sense."

What did the players think of Keefe's analysis?

"I don't think he's wrong," said alternate captain Morgan Rielly. "As a group we have to do more in the D-zone and we have to protect our goalie a bit more and protect our net front ... We're allowing too much traffic at our net and we're exposing our net too much. So, as a D corps, you have to take some responsibility and be harder to play against."

The Leafs have allowed 21 goals over the last five games (4.2 per outing). Prior to this stretch, the Leafs were allowing an average of 2.41 goals per game (second overall in the NHL).

"We got to do a lot better, especially defensively, on being a difficult team to play against," said captain John Tavares, "and understanding how hard that is game in and game out, shift in and shift out."

Neither Tavares nor Rielly seemed bothered by the way Keefe addressed things in the media.

"Regardless of what Sheldon said publicly, I think it was going to be communicated to the group that we have to be a lot better," Tavares said.

"It's just a matter of that being the honest answer," Rielly said. "I don't think we played a real hard game, especially in the third. But, as players, you're not really too worried about what's going on in terms of post-game comments, to be honest with you."

Jack Campbell has allowed 18 goals in his last four starts with an .866 save percentage in that stretch.

"Just not good enough," he said after allowing five goals on 26 shots on Wednesday. "I just want to be better. I'll look at the tape and I'll work on it and I promise I'll be better."

On Saturday, Campbell gets a break as Petr Mrazek will make his fifth start of the season. It was always the plan for Mrazek to get this game.

"You could call it a scheduled start for Petr," said Keefe. "We just feel it is important to get Petr back in again. He hasn't played a lot. He is an important part of our team. We need to get him in our net and get him some reps here. We are certainly going to need him as the calendar turns to February."

Campbell has started 28 games, which is already a new career high.

"Jack has played a lot over the course of the season — not necessarily in the last few weeks because of the schedule being what it is, but if you look at the total workload," Keefe said. "We are looking for these pockets to get both Jack rest and Petr an increased workload. We just thought we would stay with our scheduled start for Petr here."

"They had tough nights," Keefe said bluntly "It is a lot to ask of those guys."

"It's challenging," the 27-year-old defenceman said. "I think it hits you kind of hard, because you realize that each team has some extremely dangerous players. There's no point where you get to relax and maybe take an easy shift or go play in the O-zone for a shift. You're always kind of out there against high-end players who can burn you at any time."

Sandin was on the ice for three goals against on Wednesday while Liljegren was on for two. The Rangers forward they faced the most often in five-on-five play was Artemi Panarin.

"Just got to look through this game and clean stuff up and move forward from it and learn a lot," said Sandin. "Every game is a new opportunity. We learned a lot out there, both me and Timothy, playing a couple more minutes and playing top lines, too."

Sandin, who has excelled in sheltered minutes during his first full NHL season, was struck by the confidence top-six players possess.

"They're more playful on the ice," Sandin observed. "They're jumping around and making really good plays out there. It's a little bit different. They're making plays on the [blue] lines and stuff like that. It's not something you're very used to all the time. Playing against the third and fourth lines it's pretty much just pucks coming down deep and they're forechecking on you and our job is just try to break out."

Partner T.J. Brodie is impressed by just how quickly Rielly is moving these days.

"I'll look beside me sometimes thinking I'm jumping up and he's already five steps ahead of me," Brodie said with a smile on Wednesday morning. "It's fun to watch."

Rielly was asked what it means for the top pair when the usual second unit is out.

"There's really no adjustment," he said. "That's the point of a team sport. When you have guys go down, you got guys that are supposed to come up and take that responsibility, play minutes, play against good competition."

Alex Biega was minus-2 in 12 minutes and 21 seconds of ice time on Wednesday. He will be the odd man out on Saturday.

Carl Dahlstrom has been called up from the American Hockey League and will make his Leafs debut.

"I see myself as a two-way defenceman," the 26-year-old Stockholm native said, "always trying to bring that steady game and being reliable."

"He has got the ability to help in lots of different ways," said Keefe. "He moves around the ice well. He can make a pass and help you offensively by moving the puck up the ice. Also, he defends well. He showed on the ice today what we had thought. He is building off of the good play he's had with the Marlies with good gap control. He is a big guy with a long stick and closes on things that way. He uses those tools to defend."

Dahlstrom hasn't played in the NHL since breaking his hand during a game with the Winnipeg Jets on Jan. 14, 2020.

"It means a lot, obviously," he said. "I've been itching for two years now to prepare for when the opportunity comes."

Dahlstrom has 10 assists in 27 games with the Marlies this season.

Ondrej Kase and Holl have exited COVID protocol. They are expected to skate on Saturday morning, but will not play against the Islanders.

Lines at Friday's practice, per David Alter of The Hockey News: